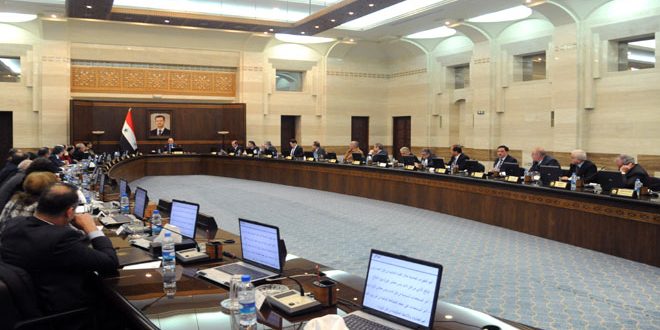 Damascus, SANA – The Cabinet approved an executive work program for restoring services and production and for boosting security in Aleppo city.

During a special session dedicated to Aleppo city chaired by Prime Minister Imad Khamis on Saturday, the Cabinet approved steps to allow citizens in Aleppo to return to their normal lives, including opening roads and providing water and electricity, in addition to evaluating the zoning plan of the city in a short and specific timeframe and assess the conditions of buildings to decide which can be repaired.

The executive work plan involves increasing fuel allocated to the city, sending a mobile unit for refilling cooking gas cylinders and two mobile fuel stations, as well as working to restore electricity to the city.

The Cabinet also approved an emergency plan for the Education Ministry on repairing 50 damaged schools in the eastern neighborhoods of the city within six months, with the goal of repairing 100 schools by the beginning of the next school year.

In the health sector the work plan involves beginning the rehabilitation of five health centers, the Optometry Hospital, and the National Hospital, while in the field of transport in involves an emergency plan to reactivate trains within the city after finishing repairs in Aleppo International Airport, and in the field of water it stipulates for repairing Sleiman al-Halabi water-pumping station.

The Cabinet formed a work team to ensure the implementation of previous decision taken by the government regarding Aleppo.