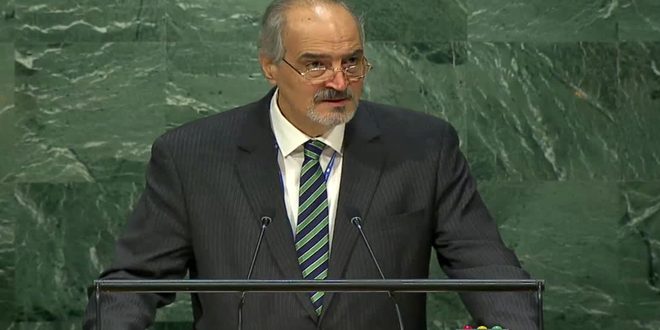 New York, SANA – Syria’s Permanent Representative to the UN Bashar al-Jaafari reiterated that terrorism is the main reason behind the suffering of the Syrian people and that combating it requires cooperation with the Syrian government.

He was addressing United Nations General Assembly (UNGA) session on Thursday where a draft resolution was proposed on humanitarian aid delivery.

In his statement on item 69 entitled “strengthening of the coordination of emergency humanitarian assistance of the United Nations”, al-Jaafari reaffirmed the Syrian government’s adherence to its principled stance of delivering humanitarian aid to all affected people without discrimination according to its constitutional duties.

He stressed that the Syrian government continues to cooperate with the UN and its agencies in aid delivery on the basis of observing the UN principles on coordination of humanitarian emergency assistance stated in the UNGA Resolution 48/162, mainly respecting national sovereignty and the role of the states concerned in distributing humanitarian aid inside their territories.

Syria’s UN Ambassador criticized some of the states who advocate the proposed draft resolution, and some of the bodies responsible for aid coordination mainly the UN Office for the Coordination of Humanitarian Affairs (OCHA), for keeping themselves occupied with politicizing humanitarian crises and shamefully covering the main reasons behind these crises, stressing that the way to solve any humanitarian crisis lies in addressing its root and real causes without politicization or falsification of facts.

Al-Jaafari found it a “very important [yet belated] step in the right path” that the draft resolution has for the first time referred modestly to terrorism as being one of the main reasons behind humanitarian crises after it had been intentionally ignored for years.

He however described this step as not enough as there should be a stronger and an unequivocal condemnation of the terrorist acts.

On another note, the Syrian diplomat said the draft resolution also lacks any mention of the unilateral coercive economic measures imposed on Syria, noting that such measures have been usually rejected and condemned by the UN for their illegitimacy and disastrous impacts on the countries’ economy and peoples’ welfare.

Al-Jaafari highlighted that the Western economic sanctions on Syria have badly affected the Syrian economy and the Syrian people’s livelihood, pushing hundreds of thousands of people to leave the country and constantly hindering the implementation of the health and humanitarian response plans in Syria.

He cited in this context the report of the UN Resident Representative in Syria in cooperation with the United Nations Economic and Social Commission for West Asia (ESCWA), issued last September, which stressed that the US and European sanctions against Syria have affected all spectra of the Syrian people. 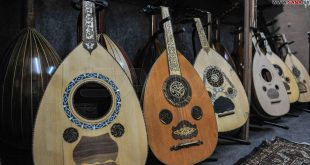