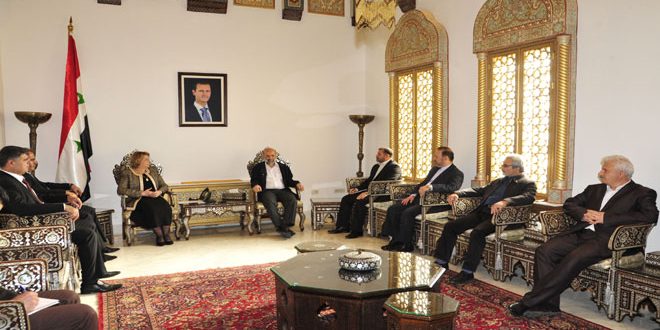 Damascus, SANA-Speaker of the People’s Assembly Hadiyeh Abbas said the Syrian-Iranian parliamentary relations are constantly growing, pointing to a close cooperation with the Iranian Shura Council for further deepening them.

During her meeting Saturday with Secretary General of the Iranian Workers’ House Alireza Mahjoub and the accompanying delegation, Abbas expressed the Syrian people’s appreciation for Iran’s support for Syria against the global war waged against it, underlining the necessity of developing the work of the Syrian-Iranian joint friendship committee.
Abbas also stressed the importance of enhancing cooperation relations between trade unions in Syria and Iran to back up the two countries’ economies.
Mahjoub, for his part, hailed the military successes of the Syrian army against terrorism, echoing Abbas’s interest in developing bilateral parliamentary relations between Syria and Iran.

He revealed that “fruitful and constructive talks” were held with the Syrian General Federation of Trade Unions which were marked by mutual agreements on a variety of topics.

In a statement to journalists following the meeting, Mahjoub said that the meeting with Dr. Abbas dealt with various topics with regard to developing parliamentary Syrian-Iranian relations and the mechanisms of supporting trade unions in the two countries.

Chairman of the General Federation of Trade Unions (GFTU) Jamal al-Qadiri said the two sides agreed on the necessity that Syria benefits from the Iranian expertise in supporting the Syrian army’s injured personnel and workers, clarifying that the two sides agreed on inaugurating an establishment “to tap into the expertise of the Iranian Martyrs’ Foundation which provides services for the war wounded.”

He revealed that a Syrian technical delegation will visit Iran soon to have a closer look at this experience.