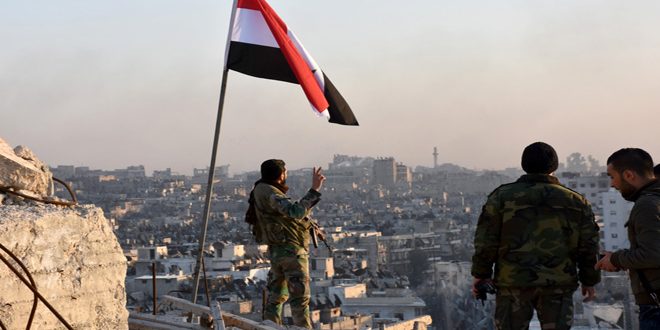 Provinces, SANA – Army and Armed Forces units continued making advances in the battle against terrorism on Monday, establishing control over the neighborhoods of al-Haidaria and al-Sakhour and the Scientific Research Housings area in the eastern part of Aleppo city.

Army units working in Aleppo have achieved new advances in their operations against positions of Takfiri terrorist organizations and restored security and stability to the Scientific Research Housings area and the neighborhoods of al-Haidaria and al-Sakhour, al-Inzarat, Sheikh Khudre, Mahalej factories, Suleiman al-Halabi station and a large part of Bustan al-Basha in the eastern part of the city. A military source told SANA that army units, in cooperation with supporting and allied forces, restored security and stability fully to the Scientific Research Housings area, and that the units are continuing to advance in the Youth Housings area in eastern Aleppo as terrorists’ ranks collapse.

Earlier today, the source said that army units, in cooperation with the supporting forces and allies, carried out accurate operations against gatherings and positions of the terrorist organizations in the eastern neighborhoods of Aleppo city and restored security and stability to the neighborhoods of al-Haidaria and al-Sakhour.

The source pointed out that the operations resulted in killing sores of the terrorists and destroying their weapons, adding that the army units are chasing the fleeing terrorists in the area.

It clarified that engineering units dismantled mines and explosives planted by the terrorists in the squares and streets of al-Haidaria and al-Sakhour neighborhoods.

Later, Aleppo Governor Hussein Diab told SANA’s correspondent that an army unit, in cooperation with supporting forces, established control over Sleiman al-Halabi water station, and that technicians have entered the station to begin repairs in order to bring it back online as soon as possible.

The army air force carried out a number of sorties on the terrorist organizations
affiliated to the so-called Jaish al-Fateh in a number of villages and towns in the countryside of Hama and Idleb provinces.

The army air force targeted the terrorist organizations’ gatherings in Mourek, al-Quneitrat, al-Araba’en area, north of Souran, north of Maan and Skaik towns and Tal Tarae in the northern countryside of Hama province and Kfromeh, al-Tamanaa and Khan Shaikhoun in the southern countryside of Idleb province.

The source added that the army destroyed the terrorist organizations’ weapons and ammunition depots, positions, armored and machineguns- equipped vehicles in addition to eliminating a number of their members.

The army units , backed by the army air force, artilleries and tanks, targeted
ISIS gatherings, hotbeds and supply routes in al-Ummal (workers) neighborhood and the villages of Ayyash and al-Baghaliyeh in the western countryside of Deir Ezzor Province and in the surrounding of al-Jafra village and the Eastern barricade of Deir Ezzor military airport in the province.

The army operation killed at least 20 ISIS terrorists and destroyed a number of their tanks and armored and machineguns-equipped vehicles.

An army unit targeted with artillery fire fortifications and movements of Jabhat al-Nusra terrorists in the area surrounding al-Masri roundabout and to the south of al-Jomrok al-Qadeem (Old Customs) in Daraa al-Balad in Daraa province.

A military source told SANA that this resulted in killing a number of terrorists and destroying a fortified position in which a terrorist operating a machinegun was located, in addition to destroying a motorcycle.

Later in the evening, army units killed a number of terrorists and destroyed their positions and fortifications in concentrated bombardments against their movements in al-Bajabjieh alley, al-Badou alley, al-Ebhar neighborhood, to the north of al-Banat “girls” School in al-Abaasyieh neighborhood and to the east of the Electricity Institution in Daraa al-Balad. area,

Army units killed a number of ISIS terrorists, injured others and destroyed their vehicles in Talit al-Awamid and the area to the north of al-Qariatin dam in the southeast countryside of Homs, according to a military source.

The source added that army units, operating in the northern countryside of the province, directed strikes on dens and gatherings for Jabhat al-Nusra in al-Ghanto and al-Sam’alil village.

The source added that due to the strikes, a number of vehicles were destroyed and a number of terrorists were killed or injured.

A number of terrorists were killed and others were injured in sorties carried out by the Syrian Air Force against their gatherings and positions in the northern countryside of Lattakia province.

Scores of terrorists were killed in the sorties and a number of their vehicles were destroyed, some of which equipped with medium or heavy machineguns.