Bogdanov meeting Haddad: Moscow reiterates support to Syria in the fight against terrorism 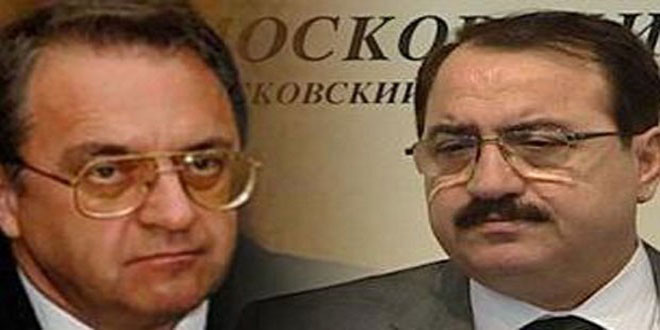 Moscow, SANA-Special representative of the Russian President, Deputy foreign Minister Michael Bogdanov affirmed Wednesday that Moscow supports Syria in the war against terrorism and helps the country reach a political solution to the crisis.

“Russia is going ahead in offering help to Syria in the war against international terrorism and pushing ahead towards a political solution to the crisis in the country in light of UNSC resolution No.2254,” Bogdanov said during the meeting according to Russian Foreign Ministry.

A statement by the Ministry added that both sides exchanged viewpoints on the developments of humanitarian, military and political situation in Syria, saying “the two sides focused on the situation in north Syria in light of Russian air and naval forces’ operations which started on Nov.15th against ISIS and Jabhat al-Nusra terrorist organizations.

Bogdanov meeting Haddad: Moscow reiterates support to Syria in the fight against terrorism 2016-11-16
m.eyon
Share
Previous A citizen injured in a bullet of a terrorist sniper in Aleppo
Next “Syria’s Battle to Defend its Past” exhibition sheds light on Syria’s archaeological treasures