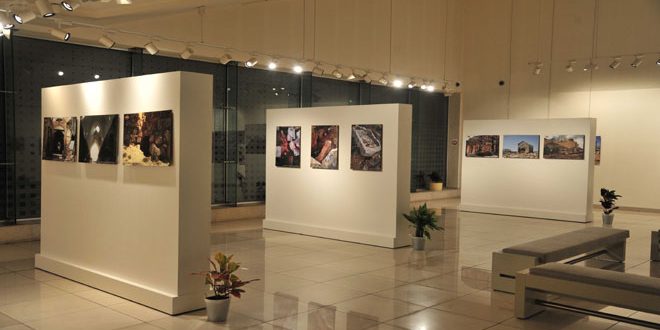 Damascus, SANA – An archaeological exhibition entitled “Syria’s Battle to defend its Past” was inaugurated at the National Center for Visual Arts on Wednesday.

The exhibition, held in cooperation with the General Directorate for Antiquities and Museums, showcased 70 archaeological artifacts, including a set of small objects stolen by takfiri terrorist organizations and were restored thanks to the efforts of the Syrian Arab army, parties concerned and the Directorate of Antiquities, in addition to huge archaeological objects . It also included big archaeological finds restored from Lebanon such as pillars’ crowns and some stone artifacts, not to mention displaying photos for terrorism-damaged archaeological objects and buildings during the war on Syria.

A 7 meters high and 6 meters wide mosaic dating back to the late Roman era and the early Byzantine era unearthed in Barheliya village in Damascus Countryside was also showcased at the exhibition.

Director of the National Center for Visual Arts, Ghyath al-Akhras, underlined the importance of shedding light on Syria’s archaeological artifacts and introducing citizens to them.

Regarding the French President Francois Hollande’s statement about transferring the Syrian archeological finds to France, al-Akhras said that the main aim is to destroy Syria’s civilization and culture and steal its ruins. In turn, Director General of Antiquities and Museums Maamoun Abdul -Karim, said that the exhibition put spotlight on the efforts exerted by the Directorate, local and official bodies and the Syrian citizens to save Syria’s archaeological treasures from theft and destruction, indicating that the directorate restored more than 7000 archaeological artifacts.

He noted that the exhibition’s title reflects the Syrians’ suffering due to war waged on their homeland and to unify efforts to defend the Syrian cultural heritage.

Director of Museums’ Affairs at the Directorate, Ahmad Deib, said the exhibition conveys a message to encourage local community to preserve their heritage and demand the neighboring countries to hold their responsibilities and prevent smuggling Syria’s archeological objects.

The exhibition lasts till the 30th of November.

"Syria's Battle to Defend its Past" exhibition sheds light on Syria's archeological treasures 2016-11-16
m.eyon
Share
Previous Bogdanov meeting Haddad: Moscow reiterates support to Syria in the fight against terrorism
Next Shaaban: Syria’s national interests the compass for any policy or decision