Army advances in Aleppo’s northern countryside, tens of terrorists killed in other areas 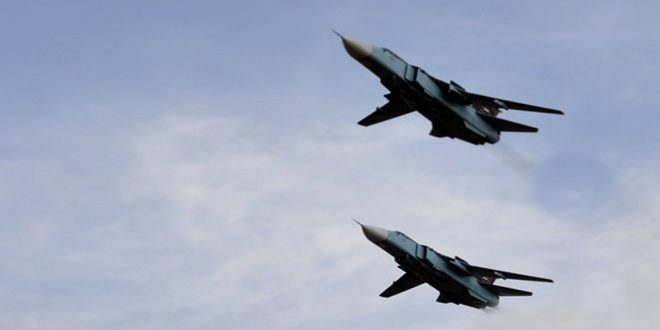 Provinces, SANA- The Army and Armed Forces, backed by the Syrian Air Force, killed on Saturday tens of terrorists and destroyed their vehicles and weapons in different areas of the country.

Army and Armed Forces units, in cooperation with supporting forces, established control over a number of strategic areas in Aleppo’s northern countryside.

The source elaborated by saying that the areas over which the army established control is 6 km wide at the front and 14 km deep, and that the operations in those areas resulted in inflicting losses in members, equipment, and vehicles on Jabhat al-Nusra terrorists.

Earlier, a military source said that army units engaged in violent clashes with heavy and light weaponry with terrorists from Jaish al-Fateh who had attempted to attack the Family House area northwest of Aleppo city, and that the clashes ended in thwarting the attack, leaving dozens of terrorists dead or injured, including terrorists from al-Nusra and the “Nour-Eddin al-Zenki movement” which Washington classifies as “moderate opposition” and funds.

The source also said that another army unit destroyed a vehicle rigged with large amounts of explosives in Menyan area on the Western outskirts of Aleppo city.

Air Force of the Syrian Army raided terrorists’ positions in the villages of al-Bouida, Tayebet al-Imam, al-Latamneh and al-Hisa in the northern countryside of Hama Province.

A military source told SANA that tens of the terrorists were killed and three positions for them were destroyed, five armored vehicles and seven vehicles equipped with machineguns were also eliminated.

Terrorists from ISIS and Jabhat al-Nusra were killed during army operations in Homs countryside.

The terrorists were killed during clashes with an army unit after they attacked several points in al-Shehabiyat area in the vicinity of al-Muhr oil field east of Homs city.

The attack was foiled and several terrorists were killed, while the rest fled towards al-Badiya (the Desert).

All members of a terrorist group affiliated to Jabhat al-Nusra were killed and one of their cars was destroyed in an operation carried out in al-Yadouda town, 5 km to the northwest of Daraa City.

A number of terrorists were killed in al-Hamadin neighborhood and one of their barricades was destroyed in al-Kark neighborhood in the continued operations of the army against their hotbeds in Daraa al-Balad area.

An army unit killed many members of terrorist groups operating under Jabhat al-Nusra command as it targeted their positions west of Jisr al-Ghariyeh in the northeastern countryside of Daraa province, according to the military source.

The source also told SANA that two cars transporting Jabhat al-Nusra terrorists between the towns of al-Nueimeh and Um al-Mayazin were destroyed, while a rocket launcher was hit west of Um al-Mayazin in the eastern countryside.

In the meantime, SANA reporter affirmed that an official within Jabhat al-Nusra named Samih al-Muheimid was killed along with a number of other terrorists as their vehicles were blown up in an ambush set up by an army unit on al-Nueima-Um al-Mayazin road.

Later in the evening, a military source said that an army unit eliminated a number of terrorists and destroyed their vehicles in Sweidan neighborhood in Daraa al-Balad and east of al-Chami farm in Da’el town in the province’s northern countryside.