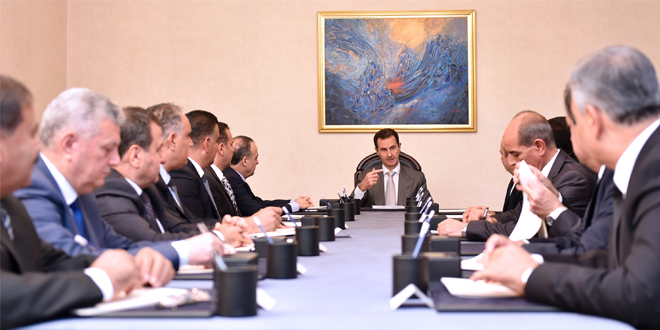 Damascus, SANA-President Bashar al-Assad received on Thursday the governors in a meeting attended by Prime Minister and the Minister of Local Administration.

President al-Assad affirmed during the meeting that the role of the governor should not be limited to representing the state in the province, but the most important is that citizens feel that the governor represents them in front of the government which provides an opportunity for a greater and more transparent cooperation between governors, citizens and local committees.

The President stressed the importance of the participation of governors and local administration institutions in the development process because they are best placed to develop appropriate plans for each area, particularly with regard to reconstruction, taking into consideration achieving justice in terms of development or service affairs for rural and urban areas.

President al-Assad underlined the importance of working to comply with the laws by everyone away from selectivity and favoritism which requires more field visits as to help in exposing the corrupted persons and bringing them to account, fighting against bureaucracy and waste in state institutions, ending irregularities and encroachment on public properties and developing an adequate cooperation mechanism between the local administration institutions and the Ministry of Internal Trade and Consumer Protection to curb prices in the interests of citizens. The President highlighted the need to support the families of martyrs and the wounded for their great sacrifices that contributed to protecting Syria.

President al-Assad noted that the Syria state will continue fighting terrorism and accomplishing more reconciliations, adding that the local administration institutions are capable through their direct relation with citizens to enhance reconciliations which have contributed to stopping bloodshed and restoring normal life to many areas.

After the meeting, Premier Imad Khamis chaired a work meeting with governors in the presence of a number of ministers concerned with the service file, in which they drew up a set of recommendations on points that have been raised during the meeting with President al-Assad, agreeing on a mechanism for more coordination between the governors. The recommendations focused on the necessity of reviewing and amending the local administration law to treat the repercussions of the war in all regions.

They also included the establishment of centers for the citizen’s service in all cities in order to simplify and facilitate the services offered to the citizens.

The recommendations affirmed the need for supporting the national reconciliation process in the Syrian cities through offering all facilities and necessary demands to make reconciliations a success.