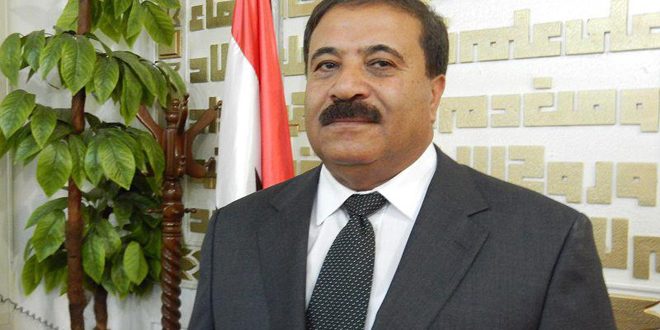 The relief and humanitarian situation in Hasaka and means to boost cooperation between both sides to improve that situation and ensure delivering aid to displaced families in the province were discussed during the meeting.

Director of Hasaka Office of the United Nations Children’s Fund (UNICEF) Arshad Karim stressed that the organization will continue providing humanitarian assistance to displaced people in cooperation with the local bodies in the province.

This assistance, he noted, includes providing schoolbags and helping the Education Directorate in implementing the self-learning system for out-of-school children and cooperating with the Water Establishment in completing joint projects of water network rehabilitation, particularly in Qamishli city.

Representative of the office of the UN Refugee Agency (UNHCR) noted that the office has provided non-food supplies in aid to more than 50,000 displaced people since the beginning of this year and is now working on restoring four makeshift centers in a number of cities in Hasaka.

Afraa Nouh, Director of the World Food Program (WFP) office said the organization has provided around 75, 000 food packages through the aid air bridge, which were transported on board 132 planes.

Other aid supplies, she added, included 20 tons of leaven for bakeries and 70 tons of peanut butter, noting that the WFP is working on implementing several income-generating projects that target 1500 citizens.

Director of the office of the World Health Organization (WHO) Khaled al-Khaled said the office is constantly coordinating with the Health Directorate of Hasaka to ensure the success of the vaccination campaigns, in addition to conducting training courses for the medical and health cadres.

He noted that there is more than 11 medical cooperation agreements that are being implementing by the WHO office in cooperation with the charity associations in the province.

The participants in the meeting briefed the international organizations’ representatives on their services departments’ needs to be provided by these organizations, including materials and equipment for water sterilization and water network repair, power generators for bakeries and mills and cooperation in rehabilitating damaged schools and the Children’s Hospital in Hasaka