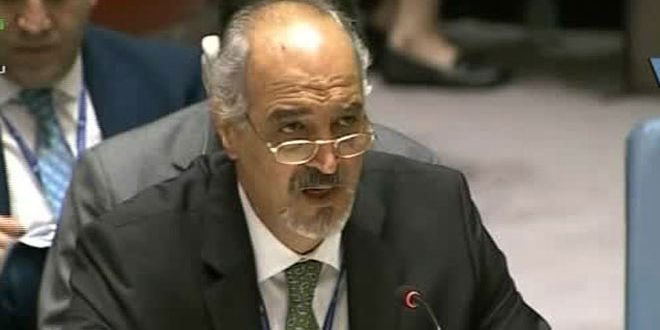 New York, SANA-Syria’s permanent envoy to the UN Bashar al-Jaafari said on Wednesday that the US, Turkish and Israeli military aggression on Syria means moving from a stage of proxy aggression into “the personal aggression”, referring to the failure of international community to condemn the US-led coalition aggression on Syrian army positions in Deir Ezzor.

“This important meeting is being convened at a sensitive time when we witness dangerous disorders that contradict positive indicators that occurred last week due to the US renunciation of the agreement it reached with Russia on September 9th,” al-Jaafari said at a Security Council meeting.

He added that Syria has welcomed the Russian-US statements on September 9th after both sides had reached the agreement which stipulated combating ISIS and Jabhat al-Nusra terrorist organizations, this agreement which has been done with the approval of the Syrian government.

“But the big shock, of which the international community has failed to condemn or express concern, was represented by the unjustified, flagrant aggression of the US-led coalition on sites for the Syrian army which combats ISIS in Jabal Tharda in Deir Ezzor,” al-Jaafari said, adding that this aggression has claimed the lives of 83 and more than 100 wounded of the army personnel.

He went on to say that Damascus has hoped that Washington meets its obligations in this regard through putting an end to the policies and practices of regimes of some countries that support and finance terrorism.

Al-Jaafari affirmed that the latest void accusations against the Syrian government and its allies in the war against terrorism of the responsibility for targeting a humanitarian aid convoy in Aleppo countryside came within an unprecedented, dirty media war by known sides that aim at gaining propaganda and political blackmail to achieve some agendas.

“At the same time, I draw the Council’s attention that the Turkish land and air forces have carried out illegitimate military operations over the Syrian territories and inside them under the pretext of striking ISIS without any coordination with the Syrian  government or the Russian operations’ command, an issue that forms a crime of aggression on Syria in light of the international laws,” al-Jaafari said.

He affirmed that Syria is ready to resume the Syrian-Syrian dialogue without preconditions in order to reach a political solution that guarantees territorial integrity of Syria.

Al-Jaafari: US-led coalition aggression on Syria means moving from a proxy aggression into "personal aggression" 2016-09-21
m.eyon
Share
Previous Interior Minister, China’s ambassador discuss enhancing cooperation in the fight against terrorism
Next Lavrov: There is no alternative to political solution to crisis in Syria