Lavrov: There is no alternative to political solution to crisis in Syria 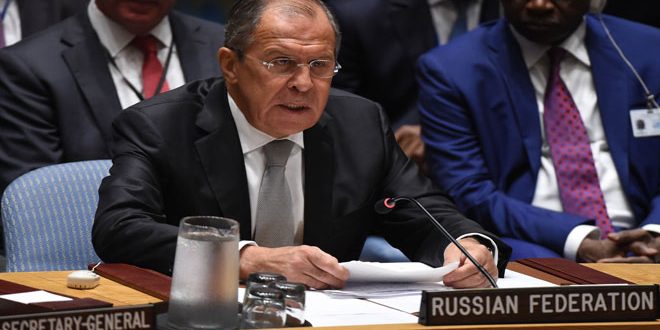 New York, SANA- Russian Foreign Minister Sergey Lavrov reiterated that there is no alternative to a political solution to the crisis in Syria, based on a comprehensive political dialogue among the Syrians, stressing the need for the resumption of Syrian-Syrian dialogue in Geneva without any attempts by some sides to impose preconditions.

Lavrov, at a UN Security Council session, pointed out that the interventions in the affairs of states and the attempts to topple the governments brought the situation to what it is now, adding that the priority in the settlement of the crisis in Syria is the separation between the so called “opposition” from terrorists, which is a main condition for the implementation of Russian-US agreement on Syria.

The Russian minister affirmed that it is important not to protect terrorists in Syria from punishment under the name of “moderate opposition”.

On the US- led coalition’s aggression on Syrian Army sites in Deir Ezzor, Lavrov said that this incident is a flagrant violation and was one of the biggest breaches of the cessation of hostilities agreement.

He pointed out that the Russian-US agreement included providing security during the delivery of humanitarian aid across al-Castillo Road, adding that the Syrian armed forces started to withdraw its vehicles from this road in accordance with the agreement while the “opposition factions” did not follow suit, and even began to fire the sites of Syrian forces.

Lavrov went on to say that the Russian Defense Ministry supplied its website with a live broadcast of what is happening in the vicinity of the al-Castillo road and that the US side has been informed with 300 violations of the truce regime on the part of “Ahrar al-Sham” and a number of other groups whose names have been mentioned in the list of those who joined the agreement, adding that the violations were represented by shelling using artillery, mortars and rockets.

Lavrov called for a full and impartial investigation into the incident of attacking the humanitarian aid convoy, adding that the Russian side offered all the information related to the attack via the images it took.

He considered that the latest developments confirmed need for the participation of all parties to settle the crisis in Syria and not only the US and Russia, adding that there must be guarantees by the sponsors of “armed groups” and a follow up to the delivery of humanitarian convoys and ensure their safety.

Lavrov stressed that any proposal to the cessation of hostilities will not give positive results as long as the Syrian army is the only one who is committed to it, pointing out that every time a new agreement being implemented for 48 hours or more, the terrorists get more ammunition and reinforcements and for that reason simultaneously steps should be taken by all the parties concerned to ensure the success of any new agreement. 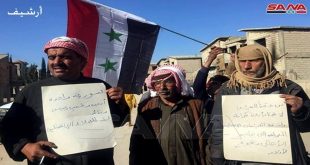