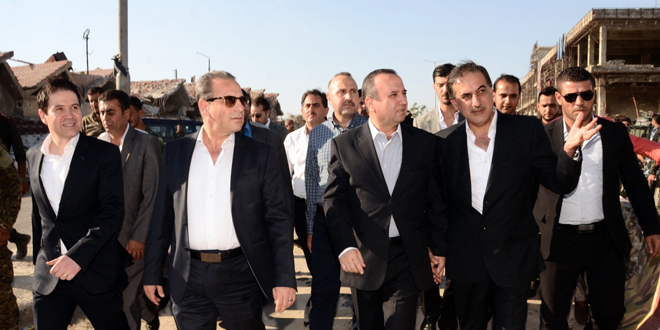 The Ministers witnessed the efforts being carried out by teams from the Electricity Company, City Council, and other establishments in order to restore services in the area and repair the damage inflicted by terrorist organizations.

Minister Makhlouf said that this visit shows the government’s care for Aleppo province and its commitment to the maintenance of infrastructure and services, while Governor Diab said that all services department are in a state of high alert and working constantly to carry out repairs.

The visit included the military academies in al-Ramousa where the Ministers and the Governor met a number of commanders and soldiers, praising the heroics of the Syrian Arab Army that resulted in defeating terrorists in the area.

They also visited injured army personnel at the military hospital, wishing them a swift recovery, and later they toured a number of neighborhoods in Aleppo including al-Furqan and al-Mogambo, meeting locals and listening to their demands.