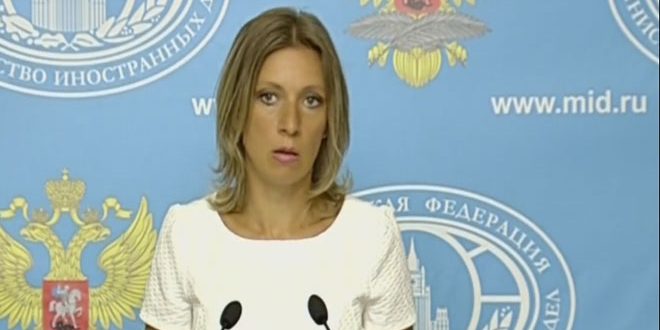 Moscow, SANA- Spokeswoman for the Russian Foreign Ministry Maria Zakharova said that Moscow and Washington achieved progress during the past six months regarding formulating joint approaches for a crisis settlement in Syria.

During a press conference in Moscow on Thursday, Zakharova added that efforts are underway to formulate a mechanism of coordination on Syria and they entered a crucial stage, explaining that what is currently happening is a very difficult and complicated process through diplomatic and military channels between the Russian and US sides in order to coordinate the formula, adding that Moscow is doing its best to ensure the success of efforts to establish such a mechanism.

Zakharova said that mixing the positions of terrorist organizations and factions of the so-called “moderate opposition” represents a stumbling block in the framework of the crisis settlement in Syria, noting that if they are separated, there won’t be any questions about how to direct strikes against the terrorists’ positions, including questions by media outlets about civilian deaths due to the airstrikes.

Zakharova recalled that the United States publicly pledged to ensure the separation of the so-called ” moderates” from terrorist organizations’ positions, then it confirmed to Russia at the experts level that this process will not take more than two weeks, but in fact this process has dragged on for months and it is now approaching a dead end.

In another context, Zakharova said that there is disagreement with Turkey over the crisis settlement in Syria which Russia is trying to overcome through dialogue and international formulas, adding that the work started in detail with the Turkish side for the completion of the first scenario in this regard.

“We believe that this work which will continue at different levels is constructive and positive,” Zakharova said, adding that contradictions can’t be solved overnight.

Moscow and Amman committed to solve the crisis in Syria politically

Meanwhile, the Russian Foreign Ministry announced that Moscow  and Amman are committed to settle the crisis in Syria politically as soon as possible.

The ministry said in a statement that the Special representative of the Russian President, Deputy Foreign Minister Michael Bogdanov and Jordan’s king Abdallah II affirmed during their meeting in Amman that the two states are commitment to settle the crisis in Syria politically on the basis of decisions of the International Syria Support Group (ISSG) and the relevant resolutions of the UN Security Council.

It added that the two sides stressed the need to “enhance the cessation of hostilities agreement and resolve the urgent humanitarian issues, including the Syrians’ problem in Jordan.”