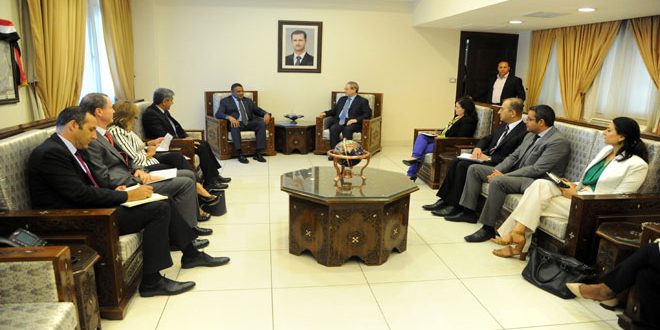 Damascus, SANA- Deputy Foreign and Expatriates Minister Dr. Fayssal Mikdad affirmed on Thursday the importance for the international community to join efforts with Syria and its allies in the fight against terrorism, intimidation and sabotage of infrastructure and public facilities by terrorist groups with the support of well-known regional and international powers.

During a meeting with United Nations Resident Representative in Syria Yaacoub El-Hillo on the occasion of finishing his missions in Syria, Mikdad expressed Syria’s confidence in the international legitimacy and the need to enhance the principles of the UN Charter which guarantees the sovereignty, independence and freedom of states.

Mikdad awarded the ministry’s shield to El-Hillo as a token of appreciation for his efforts during his mission in Syria.

In turn, El-Hillo expressed his happiness for having the opportunity to work in Syria despite the challenges under the current conditions, affirming the insistence of the United Nations to promote its efforts to help Syria end the crisis.