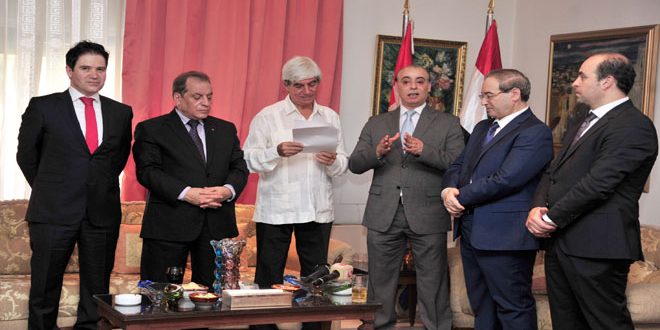 Damascus, SANA- Ambassador of the Republic of Cuba in Damascus Rogerio Manuel Santana Rodriguez held a reception ceremony at his home on the occasion of the 51 anniversary of establishing diplomatic relations between Syria and Cuba and the 90th anniversary of the birth of the leader of the Cuban Revolution Fidel Castro.

Rodriguez said in a statement to SANA that the Syrian and Cuban governments have cooperated over 51 years on the national and international level, pointing out that this close cooperation dates back to the great leaders Hafez al-Assad and Fidel Castro and these relations are maintained and developed by President Bashar al-Assad and Raul Castro.

Rodriguez pointed out that a batch of Cuban medicines will arrive to Syria in the near future, including vaccines for children to help the Syrian people to face the war waged against them as part of cooperation in the health field, stressing that Cuba stands by Syria in facing the terrorist aggression.

Rodriguez expressed Cuba’s appreciation for the support that Syria offers to Cuba to face the economic blockade imposed by the United States against the Cuban people, noting that the strong and continuous relations with Syria are the product of action by several generations of revolutionaries, fighters and diplomats.

Ambassador Rodriguez said that about 200 countries around the world celebrate Castro’s birthday, the hero and inspiration for many important events in Cuba and elsewhere in the world since he led his people to achieve great victories.

For his part, Deputy Foreign and Expatriates Minister Dr. Faysal Mikdad said in a statement that the national days in Cuba are national days for Syria, adding that the Syrian- Cuban relations are close, exemplary and useful for both countries.

Dr. Mikdad also expressed pride in Cuba’s political supporting positions towards Syria and the aid sent to Syria during the current crisis.

“We cannot forget that Cuba stood by Syria without hesitation in its war against terrorism in order to restore security to Syria in addition to condemning any external interference in Syrian internal affairs, particularly standing against the western blockade against Syria,” Mikdad added.