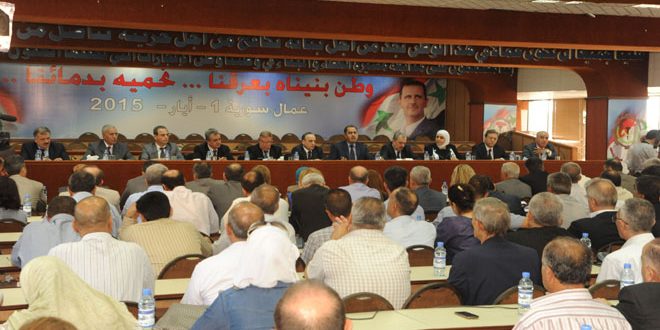 Damascus, SANA-Prime Minister Imad Khamis affirmed on Monday that the government gives special interest in workers to improve their situation and promote their standard of living.

Khamis, who was speaking at a meeting for the General council of Trade Unions, pointed out to the importance of partnership between public and private sectors in the development process to support the production sector in all domains, particularly in agriculture and industry. “The government is determined to overcome the repercussions of the terrorist war waged on Syria in implementation of the directives of President Bashar al-Assad,” Khamis said, adding that the government appreciates the important role played by workers of the homeland.

For their part, the workers and participants called on the government to combat corruption and adopt an economic policy that meets the aspirations of citizens and improves the livelihood of people.

Later, the ministers answered questions raised by the workers about the situation of their employment and compensations.