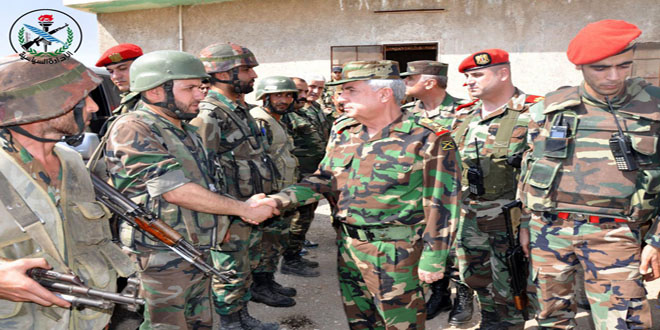 Damascus, SANA- Upon the directives of President Bashar al-Assad, Chief of the General Staff of the Army and Armed Forces Gen. Ali Abdullah Ayoub accompanied by officers from the General Command paid a field visit to military units and sites in Aleppo.

During the visit, Ayoub inspected the situation on the ground, the conditions of the troops, their combat readiness and cooperation and coordination between all forces in the war on terrorism.

Lt. Gen. Ayoub was also briefed by field commanders on the combat operations being conducted by the Army and Armed Forces against terrorist organizations in the area.

He affirmed that Syria will definitely achieve victory due to the steadfastness of the Syrian people, the heroism of Syrian Arab Army and the wisdom of President Bashar al-Assad.

For their part, the army members said that they will exert all efforts to restore stability and security to the homeland.