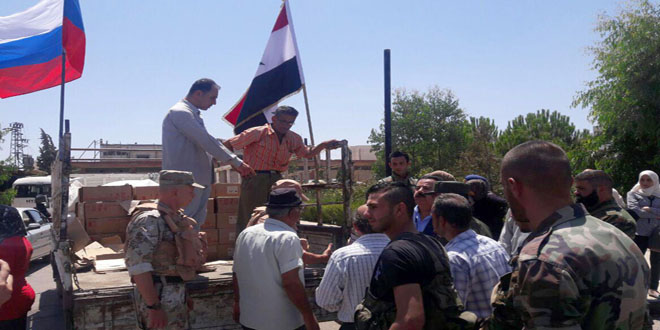 Quneitra, SANA – A new batch of humanitarian aid provided by Russia was distributed on Monday to the families of martyrs, wounded persons, and needy families in al-Baath City and Ayoba village in the eastern countryside of Quneitra province.

The distribution process was carried out in cooperation with Quneitra Governorate.

Quneitra Governor Ahmad Sheikh Abdul-Qader, who took part in the distribution process, hailed the Russian stances towards Syria in its war against terrorism.

In turn, Representative of the Russian Coordination Center in Hmeimim Sergey Ivanov pointed out that the Russian aid is an expression of the depth of the relationship between the two countries, adding that the distribution process will continue.