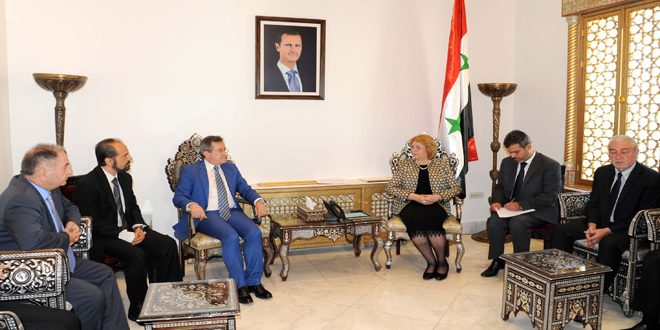 Abbas discussed with the delegation members means to enhance parliamentary relations between the two countries to benefit their peoples, with Abbas saying that the delegation’s visit shows responsibility and awareness of the terrorist war affecting Syria and the region.

She lauded the historical relations between Syria and Greece, voicing hope that the relations between the two countries will gain momentum, noting that these days Syria and Greece face common threats including terrorism, immigration and refugee waves, chaos, and thenic cleansing perpetrated by terrorists supported by regional and Western regimes including Turkey, Qatar, and Saudi Arabia.

Abbas called on European parliamentarians to pressure their governments into reconsidering their position toward the crisis in Syria and to cooperate with Syria in fighting terrorism because this is urgent and vital for the future.

For his part, Nikolopoulos said the delegation’s visit seeks to learn about the economic situation in Syria and how they can render assistance, stressing that European foreign policies do not express the European peoples in general or the Greek people in particular.

He said that Syrian-Greek relations or based on mutual love and respect, voicing readiness to provide all possible aid and boost cooperation.

Members of the delegation voiced hope that Syria will triumph over its enemies, adding that a woman becoming the Speaker of the People’s Assembly reflects the development of the status of women in Syria.