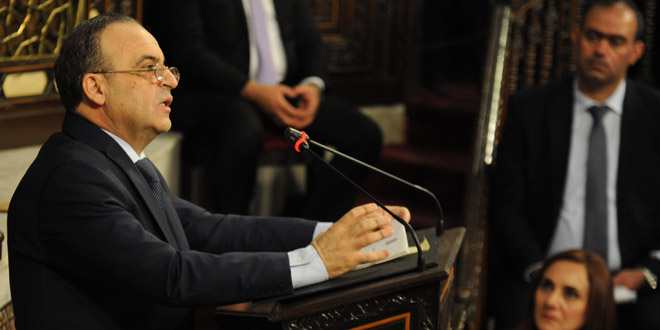 Damascus, SANA – Prime Minister Imad Khamis on Monday said that supporting steadfastness, security, national reconciliation, and caring for the martyrs and the injured are at the forefront of the government’s priorities.

Delivering the new government’s ministerial statement and the work program for the next stage during the 8th session of the People’s Assembly, Premier Khamis asserted that the government is working to have its work form a firm foundation for the steadfastness of Syria and its people that goes hand in hand with the achievements of the Army and the Armed Forces.

He said that the government will continue investing in Syria’s strength and will work towards integration between security, social, and economic goals, stressing that the government will continue to fight terrorism across the country, in addition to working towards providing security and safety to citizens, maintaining public order, and providing all that is needed to ensure the steadfastness of the armed forces.

He added that the government is keen on giving the moral and material rights to the martyrs and their families and caring for the wounded, as well as addressing the issue of abductees and missing people and expanding national reconciliation.

The Prime Minister said that the government will continue in the upcoming stage to focus on the relief and accommodation work and humanitarian response as well as improving the social situation, in addition to preparing suitable conditions for the return of displaced people abroad to their homeland.

Khamis pointed out that the government is going to work in these extraordinary current circumstances on managing the balance between the expenses of steadfastness in the face of terrorism, and that it will focus on improving the living standards of citizens and alleviate the poverty, with emphasis on optimal management of resources, revitalizing production, and providing job opportunities by different means including supporting small, medium, and micro projects. 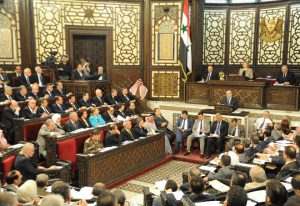 The Prime Minister asserted that the government aspires to developing the institutional structure and empowering it administratively, legally, and legislatively away from all forms of corruption, and that it also seeks to overcome the obstacles that are hindering the reconstruction process in their political, economic, social and cultural aspects.

In terms of foreign policy, Khamis noted that despite the war imposed on it and the unilateral unjust sanctions, Syria managed to preserve vital communication channels, affirming that the government seeks to consolidate its presence at international forums, strengthen alliances, and to coordinate with international cooperation partners in political, military, economic, and relief fields in a way that provides means of steadfastness and confrontation.

Khamis vowed that the government will go ahead in the educational process nationwide and it will work on upgrading the mechanisms and criteria of university admission as well as improving the opportunity of enrolling in universities as to make them available to everyone, while in the field of culture the government will continue to develop and encourage cultural centers, establishments, endeavors, projects, and programs, in addition to protecting and restoring archeological landmarks.

Addressing the field of mass media, the Premier said the government will work on improving the media discourse as to become up-to-date in terms of form and content in order to tackle issues that interest the citizens, with emphasis on supporting and developing official and private media outlets and ensuring they keep up with modern media forms such as social networking, in addition to focusing on coordinating with friendly media establishment to confront extremist and terrorist mentalities.

Regarding religious affairs, Khamis said the government will continue the strategy of combating extremism and terrorism through timely steps that keep up with the current events and others that look to the future through reforming the forums of religious discourse and monitoring the concepts of the Islamic ideology and determining its institutions.

Khamis went on to address social affairs and labor issues, saying that the government will develop social protection and care systems and programs for supporting families, as well as expanding rural development programs, improving the civil sector’s performance, and improving employment programs, with emphasis on the youths demographic.

He said that the goal of the government’s economic policy in light of the current situation is achieving feasible, realistic, and sustainable growth rates that improve citizens’ conditions and bolster the state’s resources, with long-term goals being planning for reconstruction.

He also affirmed that the government will encourage the private sector to move towards internal investment using different means, including public-private partnerships, with the aim of increasing the GDP, in addition to working to increase agricultural production, protecting the livestock and poultry sector, and reviewing the state of economic companies.

Khamis said that the government will work towards developing internal tourism services, improving their quality, and monitoring their prices, in addition to planning for investment projects as part of the reconstruction plans.

In terms of finance, he said the government will focus on efficient spending, reducing production costs, finding real and sustainable income sources, and reforming taxation and customs, and that it will also work diligently to stabilize exchange rates and prices, improve the management of cash funds, preserve the stability of the banking system, and manage the foreign currency assets with high efficiency to boost the SYP’s buying power. 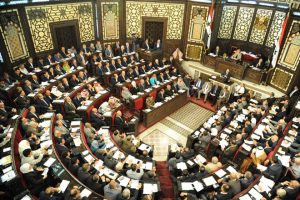 He also said that the government will work to improve foreign trade by balancing imports and exports, which would be done by focusing on importing materials for industrial production and supporting exportation, affirming that the government is working to ensure the availability of food and consumer products at reasonable prices and good quality in local markets.

The Premier also said that the government will continue to rehabilitate the electric power grid, repair damage to it, and operate it in the optimal way, in addition to expanding the grid and carrying out new power projects.

He also said that the government will exert efforts to ensure the availability of the country’s needs in terms of crude oil, natural gas, petroleum products, mineral resources, and clean drinking water.

Khamis said the government will ensure the availability of all the requirements of reconstruction, prepare a framework for regional planning and zoning, provide suitable transport services including aerial transport and commercial marine transportation, in addition to developing communications services, revising the e-government strategy, and developing judicial performance.

The Prime Minister also asserted that the government will continue to inform international organizations and friendly countries of the aggression carried out against Syria by Israel, the United States, Turkey, Saudi Arabia, Qatar, France, and Britain, and that it will continue sending letters to the UN General Assembly and Security Council documenting the events and the crimes committed by terror organization like ISIS and Jabhat al-Nusra, in addition to informing them of the negative impact of the economic sanctions on the Syrian people and working to lift them, and calling for taking steps against the states that harbor, support, fund, arm, and train terrorists, adding that all this will be done in parallel with pursing a political solution for the crisis in Syria.

“The citizens are the compass of our work, and the closer we are to them, the more we can continue performing correctly and correct our mistakes, and all of this ultimately serves the interest of the country and the citizens,” he concluded.

For her part, the Assembly Speaker Hadiyeh Abbas said that the tasks entrusted to the new government and the hopes riding on it are significant, and this requires working day and night, doubling efforts, launching initiatives, and creating solutions to overcome the exceptional circumstances which Syria is going through.

Abbas stressed that tackling issues that are important to citizens and improving their living condition must be at the top of the government’s priorities along with working to provide the requirements of steadfastness, and this is achieved by providing all the necessities that ensure all citizens lead decent lives, providing essential services, supporting agriculture and industry, and caring for issues related to education, science, and research.

She went on to say that ensuring all citizens lead decent lives can be achieved by procuring resources, revising wages and prices, limiting manipulation of prices and monopolies, supporting small and medium projects, rationalizing consumption, boosting the government’s role in positive intervention, and curbing chaos and infringements.

Abbas said the first step on the road of reform and success is enforcing the rule of law, and that this is part of the battle against terrorism, expressing the Assembly’s commitment to being the honest voice of the citizens and to fighting corruption without exceptions, as well as its readiness to cooperate with the government in approving laws that serve the interests of the homeland and the citizens.

She wished the government success in fulfilling its duties towards the country and the people, saluted Syria’s martyrs, and wished the injured a swift recovery.