Locals return to Hrairay in Barada Valley after army secured it 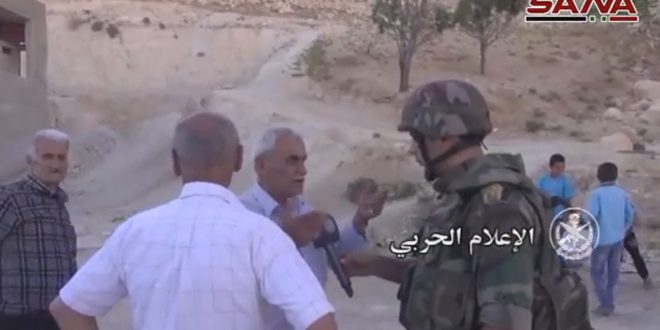 Damascus Countryside, SANA- People from the town of Hrairay which is located in Barada Valley in Damascus Countryside began returning to their homes after the Syrian Arab Army and allied forces restored security and stability to the area.

The locals thanked the army for clearing the area of terrorists and restoring security and stability to their town, saying that terrorists had imposed harsh conditions on them, displaced a large number of them, deprived them from working in their farms or harvesting their crops, and prevented children from attending schools.

On Friday, units of the Army and Armed Forces in cooperation with allied forces restored security and stability to Hrairay after eliminating the remaining hotbeds of terrorists in it, combing the area, and dismantling explosive devices and bombs in some buildings and streets.