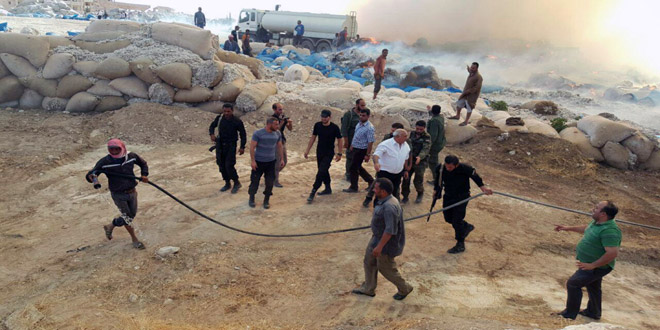 Hasaka, SANA – Fire fighters and Civil Defense personnel have managed to contain 90 percent of the fires that erupted on Thursday in the cotton stores in the Sport City Center in Hasaka.

The fires broke out due to an act of vandalism perpetrated by terrorist groups.

Director of Hasaka Cotton Ginning Mills Atallah al-Najm told SANA that the firefighters and Civil Defense forces rushed to deal with the fire and prevented it from spreading to the barley production stored near the cotton stores.

He pointed out that 8350 tons of cotton were destroyed in the fires, adding that an amount estimated 250 tons were intact.