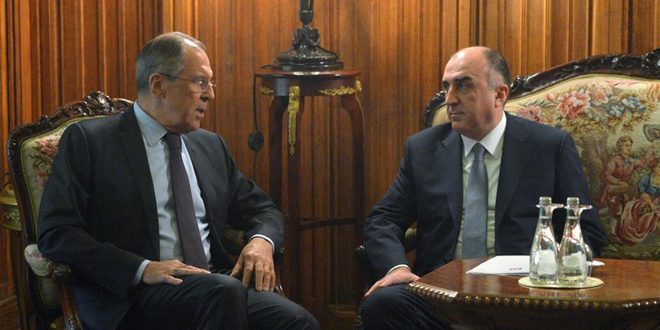 Baku, SANA – Russian Foreign Minister Sergey Lavrov renewed his country’s adherence to the political solution for the crisis in Syria in accordance with the UN resolutions, expressing concern over UN Special Envoy for Syria Staffan De Mistura’s lingering to fulfill his commitments on holding a new round of talks in Geneva.

In a press conference held in Baku Tuesday with his Azerbaijani counterpart Elmar Mammadyarov, Lavrov said that “We are worried over UN Special Envoy for Syria Staffan De Mistura’s lingering to fulfill his commitments on holding a new round of talks in Geneva and over the statements he gives on the necessity for Russia and the USA to reach an agreement for managing issues related to a political settlement in Syria.”

Lavrov clarified that De Mistura is hinting in his statements that the United Nations and its Secretariat will not hold a new round of talks of the Syrian consultations unless such an agreement is reached, stressing that Moscow seeks adherence to the system of cessation of hostilities in accordance with the UN Security Council resolutions which do not include the terrorist organizations of ISIS, Jabhat al-Nusra and others.

The Russian Foreign Minister hoped that dialogue with Ankara on settling the crisis in Syria will be franker, adding that normalizing relations between Moscow and Ankara would positively affect the general situation in the Middle East.

He asserted that Russia will work on reaching agreements on applying the UNSC resolutions and the international community to support Syria.

Lavrov said that only the Syrians themselves can decide the future of their country.

“However, it is impossible to substitute inter-Syrian negotiations process with the Russian-US duet,” he added.

“I think that this is a very harmful signal which is being sent to irreconcilable opposition – the so-called High Negotiations Committee – which is only occupied with putting forward ultimatums about the resignation of (Syrian President Bashar) Assad and some kind of deadlines,” the Russian Foreign Minister noted.

At the meeting with the US State Secretary John Kerry on July 14-15 in Moscow, Lavrov will try to coordinate “the common approach that will be based on absolutely clear, unambiguous principles outlined in the resolution of UN Security Council.”

The Russian diplomat noted that Russia plans to discuss the problem of the violations of the cessation of hostilities agreement in Syria by groups linked to Jabhat al-Nusra terrorist organization and the issue of separating the “opposition” from terrorists.