Army establishers control over Maydaa in Eastern Ghouta, kills Al-Nusra and ISIS terrorists in other areas 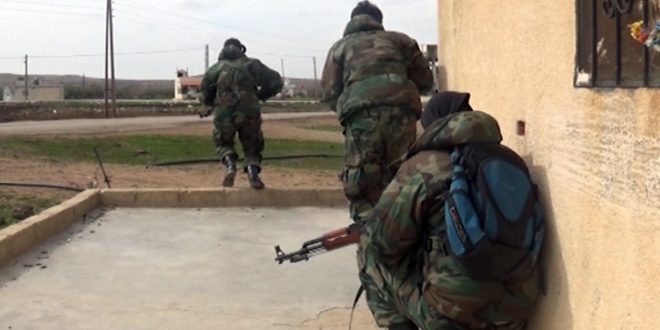 A military source announced on Monday afternoon that the Army and Armed Forces restored security to the town of Maydaaa in the Eastern Ghouta part of Damascus Countryside after eliminating the remaining gatherings of terrorists in it.

The source said in a statement to SANA that army units, in cooperation with the popular defense groups, clashed with terrorist groups that attacked military posts and civilians in Maydaa in the depth of the Eastern Ghouta, and that the clashes resulted in killing a number of terrorists, injuring others, and establishing full control over the town.

Engineering units combed the town completely, dismantling scores of explosive devices which were planted by terrorists, and confiscated various arms and ammunition which had been in the possession of the so-called al-Islam Brigade.

Establishing control over Maydaa is a considerable military achievement since it completes and enhances the security perimeter around the areas where terrorists are active in the Eastern Ghouta and cuts off one of the most important supply routes they had been using to procure arms and ammunition through al-Badiya desert.

An army unit destroyed a fuel tanker affiliated to ISIS terrorists in the western countryside of Sweida province.

A field source told SANA that the army unit destroyed a fuel tanker loaded with stolen fuel for ISIS terrorists in the village of al-Aslaha which was coming from the eastern desert.

Last Monday, an army unit, in cooperation with popular defense groups, destroyed 11 fuel tankers and an ammunition-loaded vehicle for the Takfiri organization in the eastern countryside of Sweida province.

The Syrian Army Air Force destroyed vehicles for ISIS terrorist organization in the vicinity of Jeb al-Jarah and the east side of Palmyra in the countryside of Homs province, a military source told SANA.

A unit of the army ambushed members of a terrorist group from Jabhat al-Nusra in the surrounding of al-Qantara Ashimalya in Hama countryside.

The army’s operation ended up with the killing of 5 terrorists, among them a leader named Abdullah al-Makhzoum.

Meanwhile, in the southern province of Daraa, army units destroyed two vehicles for Jabhat al-Nusra terrorist organization and killed a number of its terrorists in Tal al-Sheikh Hussain, Teloul Khleif and Daraa al-Balad.