Nasrallah: Only path before Palestinians is resistance and steadfastness 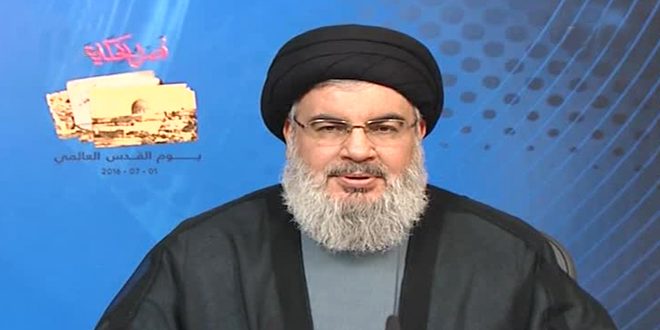 Beirut, SANA – Secretary General of Lebanon’s Hezbollah, Sayyed Hassan Nasrallah, said that the only path before the Palestinian people and the people of the region who are targeted by Israel is resistance and steadfastness.

In a speech on Friday on occasion of International Quds Day, Nasrallah said that Israel is an occupying, thieving, and pillaging entity that commits terrorism, and that it cannot be acknowledged and no concessions can be made to it.

He said that some sides created crises and wars in the region and rallied massive financial and military resources to undermine the states and movements that embrace the ideology and resistance and to normalize relations with Israel, with some stepping in to foil the resistance in the peak of its progress against Israel.

“All the people of the Arab and Islamic world must strike the hand of those who make wars and impose them and insist on continuing them, who foil any form of political solution in Syria or in Yemen or Bahrain or Libya, and who support Takfiri and terrorist movements,” he said, noting that the degree of disgrace and shame among Arabs has reached the point that some of them participated in the Herzliya conference, including a representative of the so-called “Syrian opposition” in a sign of the future that “opposition” plans for Syria.

Nasrallah noted that Israelis are now comfortable and talk about the destruction of Arab armies like in Syria and Iraq and depleting other Arab armies like Egypt, and now the Israelis want to be partners in the “war on terrorism” while at the same time they support Jabhat al-Nusra and other terrorist groups with weapons, funds, information, and medical treatment on the borders with the occupied Syrian Golan.

“Had it not been for the preemptive war waged by Hezbollah in Syria and the efforts of the Lebanese army and security agencies, ISIS suicide bombers would be attacking all of Lebanon,” he asserted.