Al-Jaafari: Only way to fight terrorism is to establish international alliance with Syria’s participation 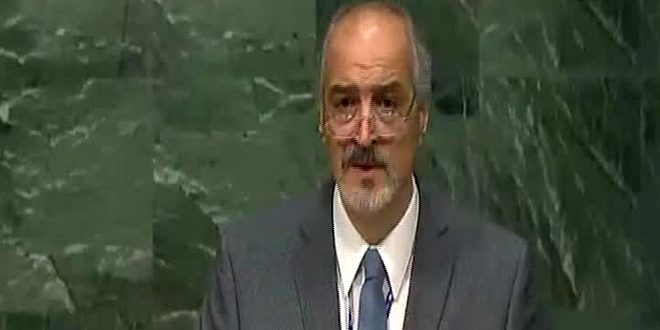 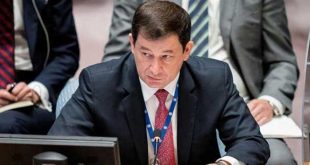 New York, SANA-Syria’s Permanent Representative to the United Nations Dr. Bashar al-Jaafari said that any effort for fighting terrorism will not succeed if it violates international law and if it’s carried out without coordination with the governments of concerned states, stressing that the only successful way to fight terrorism is to establish an active international alliance within the framework of international law and with the participation of concerned states, first among them being the Syrian state.

Addressing the UN General Assembly during a meeting on the review of the UN Global Counter-Terrorism Strategy, a global instrument adopted by the Assembly in 2006, al-Jaafari warned against the attempts by some member countries to justify their military intervention in Syria under article 51 of the UN Charter, stressing that by doing so, they manipulate and undermine the UN Charter and international law.

He asserted that the Syrian delegation relayed many official letters to the UN Secretary-General on the harm done to Syrian civilians, economic facilities, infrastructure, and oil and gas fields do the aerial operations of the so-called international coalition, which targets the Syrian state’s resources and infrastructure under the pretense of “fighting terrorism,” with the most recent such attacks destroying civilians’ homes, a sugar factory, a consumer products retail outlet, a school, and a number of bridges and grain silos in the city of Manbej.

Syria’s Representative stressed the need to deal with extremist Takfiri ideas and cutting off the resources that come to terrorist organization both directly from certain governments and indirectly from others that trade in oil, gas, and archeological artifacts with terrorists.

He also stressed the necessity of preventing the arming of terrorists, particularly preventing terrorists from procuring WMDs and means to produce and deploy them, adding that Israel along with the Qatari and Saudi regimes is supporting terrorist organizations affiliated with Jabhat al-Nusra in the occupied Syrian Golan in an example of state terrorism.

Al-Jaafari said that over the past five years, the UN dealt with the issue of combating the terrorism targeting Syria in a biased manner, with several member states foiling any active and legitimate UN steps to confront terrorist organizations in Syria, which had disastrous consequences.

He called for the UN to play an active role in fighting terrorism in a manner that respects international law strictly, and without politicization or double standards.

Syria’s Representative voiced regret that despite the terrorist acts that have been taking place in Syria for years and in other countries, terrorist organizations are still capable of movement, recruitment, planning, funding, and carrying out reprehensible terrorist attacks in bombings.

Al-Jaafari once again warned about the growth and spread of terror organizations like ISIS, Jabhat al-Nusra, Boko Haram, East Turkestan Islamic Movement, Caucasus Emirate, Al-Shabaab, Jaish al-Islam, Ahrar al-Cham Islamic Movement, and other entities that commit terrorist acts around the world and that receive support from UN member states that use them as a cheap and compliant pawn to serve their interests and to destabilize other states.

He regretted that some Security Council member states not only hinder the listing of some of those organizations as terror groups, but also seek to legitimatize and embellish them by giving them various labels like “moderate armed opposition groups” or “non-state actors” or “armed rebel groups.”

He noted that a few days ago, some Security Council members suspended the resolution of a Syrian request to list the group known as “Mohammad Abu Obaidah al-Muhajer army” as a terror group despite the fact that this group swore allegiance to Jabhat al-Nusra and Al Qaeda, wondering how a group led by a Libyan, a Tunisian, an Egyptian, and a Frenchman can possibly be “moderate Syrian opposition.”

Al-Jaafari addressed the phenomenon of foreign fighters, tens of thousands of which were sent to Syria from more than 115 countries according to UN reports, and this was done with support and facilitations by states including Turkey, Saudi Arabia, and Qatar, which raises the question of how much do some UN member states respect their commitments in counter-terrorism and calls for holding them accountable for breaching international law.

He said Syria hopes the UN Global Counter-Terrorism Strategy and other counter-terrorism agreements will be applied in practice to eliminate the threat of terrorism, noting that the resolution adopted on Friday included a number of important additions to the Strategy that deal with new developments and challenges.

Al-Jaafari asserted that the Syrian delegation was involved in talks in a very committed manner, providing constructive suggestion and showing flexibility in order to achieve accord and thus reach full application of the points agreed on, with the goal of this being translated into urgent action on the ground that produces decisive results.

He thanked the permanent representatives of Iceland and Argentina and their teams for the efforts to facilitate the fifth revision and talks on the draft resolution, concluding by welcoming the efforts for supporting victims of terrorism who are unfortunately numerous in Syria, stressing the need to support them and help them recover. 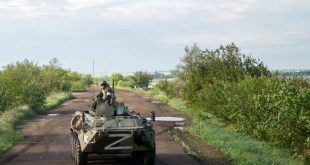