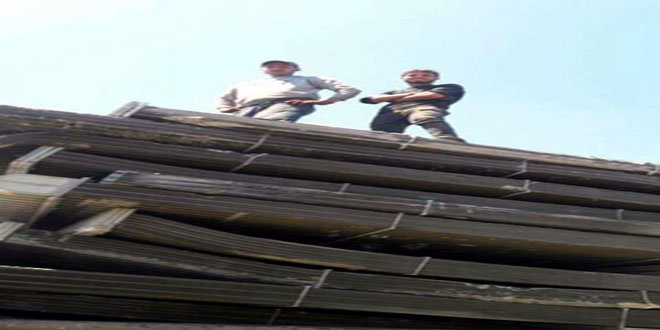 Hama, SANA – Terrorists of “Ahrar al-Sham” and Jabhat al-Nusra have looted equipment and supplies in Zayzoun power plant and smuggled them across the villages and towns in the southwestern countryside of Idleb province and all the way into the Turkish territory, according to reports from local sources in Jisr al-Shughour area in Idleb.

In a statement to SANA, a source at Zayzoun facility said they received many phone calls from the locals in Jisr al-Shughour countryside in which the latter said they saw heavy vehicles, tower cranes and trucks for terrorist groups loaded with equipment and machines moving out of the plant and heading towards the Turkish land.

Besides the calls, there have been also pictures showing terrorist groups dismantling the giant boiler steam pipes in the plant and transported the equipment on board trucks, said the source, indicating that the terrorists must have resorted to highly experienced people to dismantle the equipment.

The source pointed out that Zayzoun plant was evacuated after a terror attack by Jabhat al-Nusra and other Takfiri groups in order to preserve the lives of its workers and expertise, noting that the plant, whose establishment cost more than half a billion dollars, was fully equipped before the evacuation.