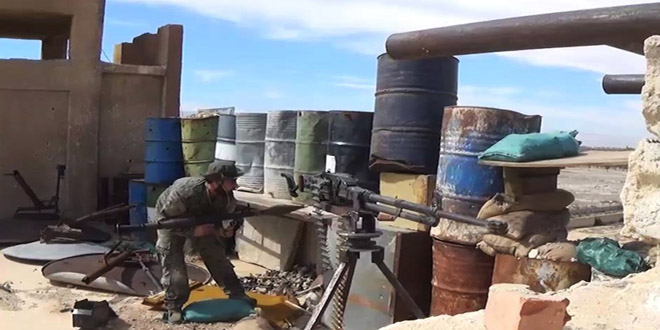 An army unit in cooperation with popular defense groups advanced along Bala-Jisrin axis in eastern Ghouta in Damascus countryside and established control over more points in the area after killing a number of terrorists and destroying their fortifications and weapons, a military source said on Tuesday.

Many terrorists were killed or injured and a fortified position for them, along with their weaponry and ammunition, were destroyed in the operation.

During combing operations in farms east of Jisrin, a large network of tunnels and trenches that terrorists were using for launching their attacks was discovered.

An army unit ambushed a Jabhat al-Nusra terrorist group on Daraa-Tafas axis in the southern Daraa province, killing its members and destroying their vehicles.

Army units in cooperation with popular defense groups repelled an assault by terrorist groups on a number of military posts in Nahshaba area in the northern countryside of Lattakia.

The source added that the clashes with terrorists left scores of them dead or injured and destroyed their ammunition and weaponry.

Terrorist organizations acknowledged on their pages on social media sites the death of the so called “Abu Hajar al-Bennishi,” a field commander of Jabhat al-Nusra and the so called “Ahmad al-Shishani”, one of the military officials in the so called “Ajnad al-Caucasus” in Lattakia northern countryside.

The source explained that heavy clashes erupted with the attacking ISIS terrorist groups in the surroundings of al-Tharda Mountain, located to the south of Deir Ezzor city, resulting in the death and injury of several terrorists before the rest of them managed to flee.

While the clashes were on, an army unit targeted gatherings of ISIS terrorists and their movements in the vicinity of al-Tharda Mountain, inflicting losses upon their ranks.

An army unit killed members of a terrorist group from ISIS in al-Qasr village in Sweida northeastern countryside.

The army unit also destroyed the weaponry and ammunition of the eliminated group.

Army operations 2016-06-28
h.said
Share
Previous Prague: The Czech aid to Syria aims at easing people’s suffering and helping in reconstruction
Next Terrorists loot equipment of Zayzoun Power Plant and smuggle it into Turkey