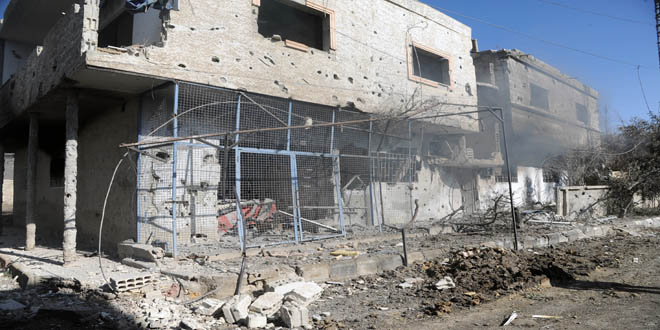 Lattakia, SANA – The Russian Coordination Center observed four breaches of the cessation of hostilities agreement by terrorist groups during the past 24 hours.
The Russian center, based in Hmeimim airbase, said in a statement on Sunday that terrorists of the so- called Jaish al-Islam targeted Syrian army positions with mortar rounds in different areas in Damascus countryside.

The cessation of hostilities agreement, which came into effect on 27th February 2016, does not cover ISIS, Jabhat al-Nusra or other groups designated as terrorist organizations by the UN Security Council.

The total number of towns that joined the agreement has reached 164 after a town in Daraa joined it, the center said, affirming that Russian air force did not conduct any strike against armed groups which reported their joining the agreement. to Russian and American coordination centers.

The statement noted that terrorists of Jabhat al-Nusra shelled, with artillery and local made mortar shells, Handarat town al-Nairab airport and other neighborhoods in Aleppo.