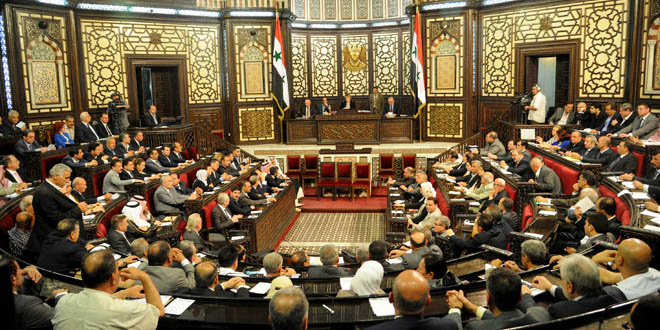 Damascus, SANA – The People’s Assembly resumed its second session of the first ordinary round, chaired by Speaker Hadiyeh Abbas.

The Assembly members’ discussions focused on services and living conditions issues, including finding economic alternatives to reduce citizens’ suffering, monitoring prices, and developing the Assembly’s work and amending some of its regulations.

The members stressed the need to amend the regulations for passing bills, revising some laws, naming a spokesperson for the Assembly, and improving the work of its committees.

They also addressed the negative repercussions of the recent raising of peteoleum products’ prices, in addition to touching on issues related to makeshift housing centers, finding new revenue sources for the state general treasury, the issue of abductees, caring for the families of martyrs and injured people, agriculture, and facilitating the transportation of people from Hasaka province.