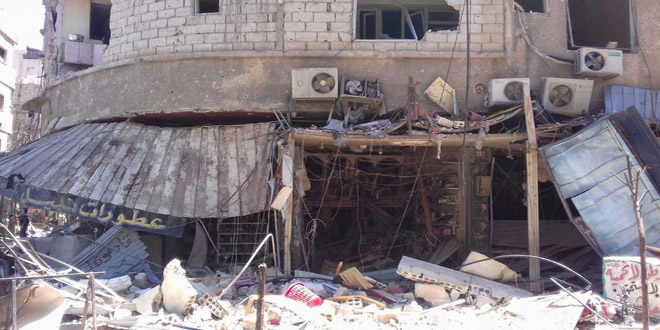 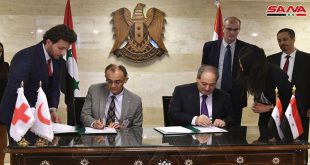 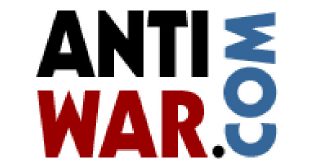 Lattakia, SANA-The cessation of hostilities agreement was breached by terrorist groups five times during the last 24 hours, raising the total number of breaches to 694 since the agreement came into effect, the Russian coordination center said.

The Russian center, based in Hmeimim airbase, said in a statement Monday that terrorists of the so- called Jaish al-Islam targeted with mortar rounds a number of military positions in Damascus countryside.

The total number of towns that have announced joining the agreement reached 157, the center added.

The Russian center affirmed that groups affiliated to the terrorist organization of Jabhat al-Nusra renewed their attempts to foil the truce, announced yesterday, by shelling Handarat town, Nairab airport and neighborhoods of al-Sheikh Maqsoud, al-Zahera and al-Khalediya in Aleppo, while other terrorist groups targeted Ain Al-
Qantara, Ako and Talat Rasha towns in Lattakia countryside as well as Marj al-Sultan and al- Baliliya in Damascus countryside, and a military position in Quneitra countryside.

On the other hand, the statement noted that the Russian center delivered five tons of humanitarian aid to locals of Tal Salhab town in Hama countryside, while a Russian plane dropped a shipment of international-provided humanitarian aid weighing 17 tons over the ISIS besieged Deir Ezzor city.

breaches Hmeimim airbase humanitarian aid Tal Salhab 2016-06-21
Barry Temmo
Share
Previous Russian army’s Chief of Staff: We are fed up with situation in Syria, not the Americans
Next 100 national companies participate in “Made In Syria” shopping festival in Damascus 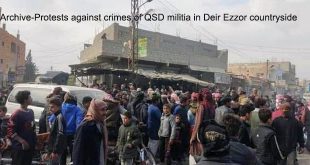 Deir Ezzor, SANA- A number of US occupation–backed QSD militia gunmen were injured on Saturday …