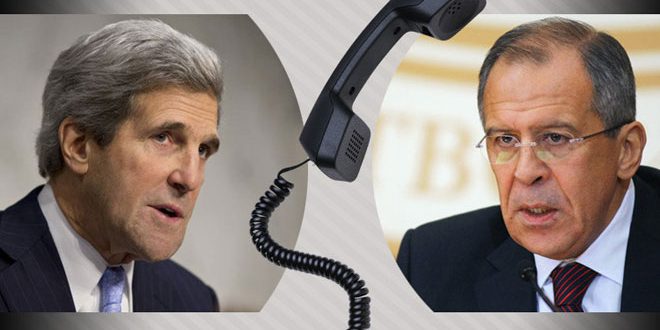 Moscow, SANA-Russian Foreign Minister Sergey Lavrov discussed on Tuesday with his US counterpart John Kerry coordinating the stances of Russia and the US on combating ISIS and Jabhat al-Nusra terrorist organizations in Syria.

“Lavrov and Kerry, in a telephone call, discussed means of coordinating efforts to fight ISIS, Jabhat al-Nusra and other terrorist organizations existed in Syria,” Russian Foreign Ministry said in a statement.

In a relevant context, Lavrov and his Egyptian counterpart Samih Shukri, in a telephone call, called for adhering to the cessation of hostilities agreement in Syria during the holy month of Ramadan.

“Moscow and Cairo consider that a stable cessation of hostilities will pave the way for delivering the humanitarian aid and push dialogue process between the Syrian government and the opposition forwards,” Sputnik news agency quoted the Russian Foreign Ministry as saying in a statement.