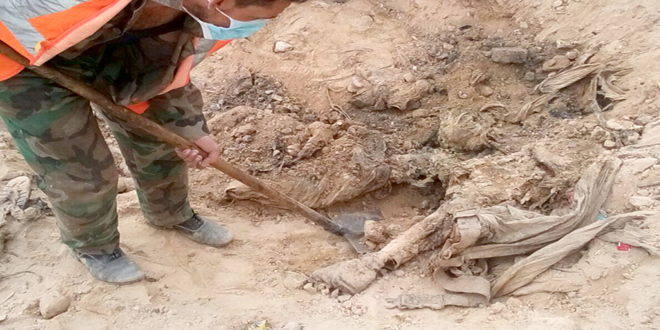 Homs, SANA – A mass grave was uncovered during combing operations of the Syrian Arab Army in the area surrounding Palmyra Airport, in the eastern part of Homs central province.

31 corpses, including bodies of a woman and a child, who were slaughtered by terrorists of ISIS organization, were found by an army unit and the popular defense groups to the southwest of the Airport, according to a field source from Palmyra city.

The source clarified that the bodies showed marks of torture inflicted by ISIS terrorists upon the victims as some of whom were headless.

On April 1st, a mass grave was uncovered by the popular defense groups in the northeastern parts of Palmyra city containing bodies of 40 people who were killed by ISIS terrorists, all of whom belonging to women and children.

On 27th of March, Army restored stability and security to Palmyra after eliminating the archeological city of ISIS terrorists.