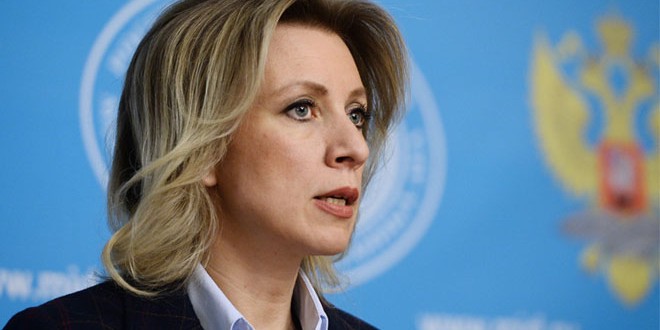 Moscow, SANA- Spokeswoman for the Russian Foreign Ministry Maria Zakharova said that Russia is concerned about attempts to rename the extremist terrorist groups in northern Syria with an external support.

Zakharova said in a press conference on Thursday that there are news about forming a new organization called al-Jabha al-Shamaliya (the Northern Front) or al-Jaish al-Shamali (The Northern Army) which includes all the armed groups in Aleppo including Ahrar al-Sham, al-Sham Brigade and Nur-Eddin al-Zinki with a declared aim to fight ISIS organization and this step is expected to get support from the US air force and the Turkish artillery.

Zakharova added it is possible that a safety zone will be established along the Syrian-Turkish borders and that there are plans by foreign powers to control it with the help of the illegal armed groups mentioned above.

Zakharova pointed out that the situation in Syria is still tense although the cessation of hostilities is still valid in general, noting that the terrorist organizations in Syria are seeking to disrupt the agreement by initiating provocations including carrying out bloody attacks against innocent civilians.

In response to Saudi statements about Plan B in Syria, Zakharova said that foreign ministers of the countries participating in the International Syria Support Group did not discuss during their meeting in Vienna two days ago this plan but they all confirmed commitment to enhancing the cessation of hostilities, the delivery of the humanitarian aid to the Syrians and supporting the political settlement of the crisis.