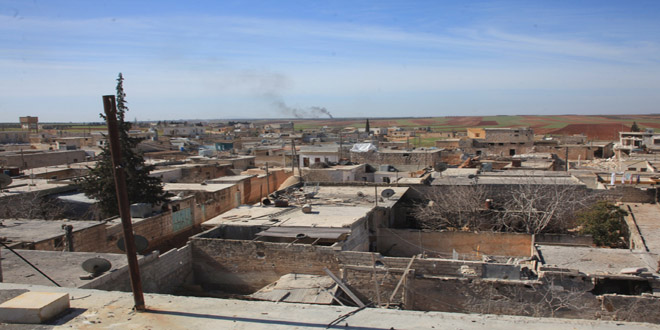 Local sources in the village told SANA that big groups of Al-Nusra terrorists attacked the safe village of Khween, 23 Kms to the east of Khan Sheikhoun city, killing 15 civilians, including 4 children, and destroying a number of residential houses.

“Popular defense groups clashed with the terrorists, driving them outside the village after killing at least 25 of them, seizing 3 of their vehicles, 2 heavy machineguns and a number of rifles”, the source affirmed.

In the eastern province of Hasaka, three civilians got injured in an explosive device blast planted by terrorists in the northeastern countryside of Hasaka Tuesday.

Local sources told SANA that an explosive device, planted by terrorists at the eastern entrance of Al-Qahtaniya city, went off leaving three civilians injured, one in critical condition, and material damage to the place.