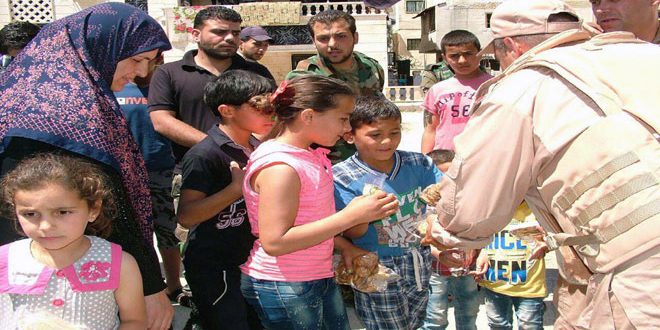 Lattakia, SANA-Food aid offered by Russia was distributed among the families of Kafraya and Foua towns who were displaced due to the criminal acts of the terrorist organizations and are currently living in temporary housing centers in Lattakia province.

Col. Vitaly from Russian Center for Coordinating and Observing the Cessation of Hostilities in Hmeimim airbase in Syria said that Russia is providing food aid to those who are have been suffering for a long time under the siege of the towns of Kafraya and Foua towns, adding that the aid includes rice, pasta, beans and baby food.

The aid was distributed in parallel with offering health services through a medical point.

The families of Kafraya and Foua called for exerting all efforts to break the siege of their towns imposed by the terrorist organizations.