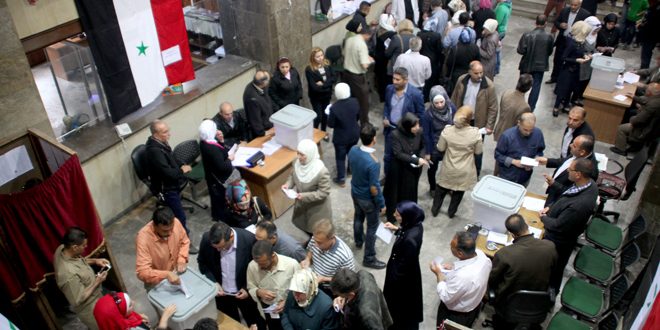 Damascus, SANA, The Judicial Sub-Committees for Elections in Aleppo and its countryside decided to cancel the People’s Assembly (parliamentary) elections held Wednesday in four voting centers due to the violations of provisions of the Law of General Election No. 5 for the year 2014, the Higher Judicial Committee for Elections (HJCE) said.

Parliamentary elections were canceled in centers Nos. 79, 70, 251 and 254 and it will be repeated on Thursday.

On the other hand, Aleppo general prosecution decided to imprison a number of persons including head of the voting center No. 79 and a member of the election committee in the center No. 254 for violating the provisions of the election law.

The People’s Assembly elections for selecting 250 members from over 3,500 candidates from across all Syrian provinces were held Wednesday April 13th
2016 from 07:00 to 19:00 when the HJCE announced the extension of vote-casting for five hours until 12:00 midnight at all polling centers due to massive turnout.