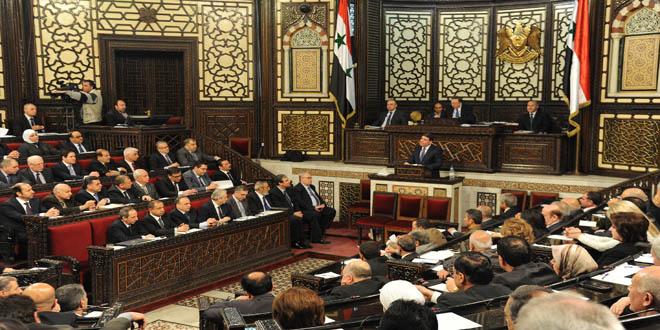 Damascus, SANA – Speaker Mohammad Jihad al-Laham headed on Thursday the last session of the 12th regular round of the first legislative term of the People’s Assembly, which was attended by Prime Minister Wael al-Halaqi and a number of ministers.

Parliamentary elections for the second legislative term of the People’s Assembly are scheduled to be held on April 13, 2016.

“Syria will remain the homeland for all its citizens as it has always been over seven thousand years,” said Speaker al-Laham, stressing that Syria, throughout history, has never accepted to be divided and will remain a united country where all its people live in freedom and dignity.

In his turn, Premier al-Halaqi reiterated that Syria will maintain its unity, territorial integrity and identity and will continue to reject all forms of hegemony, guardianship or partitioning.

He added that no matter how the US and its allies try to exploit the Kurdish issue, they will not succeed “as there is no chance for federalizing or dividing Syria,” affirming that the Kurds are an integral part of the Syrian social fabric.

The Premier said a national program to move towards post-crisis Syria is being launched that will employ national cadres to prepare for the reconstruction process according to the capabilities and priorities.

He explained that the plans include establishing new urban areas in replacement of unregulated housing areas and terrorism-affected areas, in addition to completing already standing projects with the help of friendly countries.

Al-Halaqi noted that projects related to energy and electricity and other vital fields will be carried out in cooperation with Indian, Russian, Iranian and other companies.