Lavrov: Syrian people to determine the future of their country 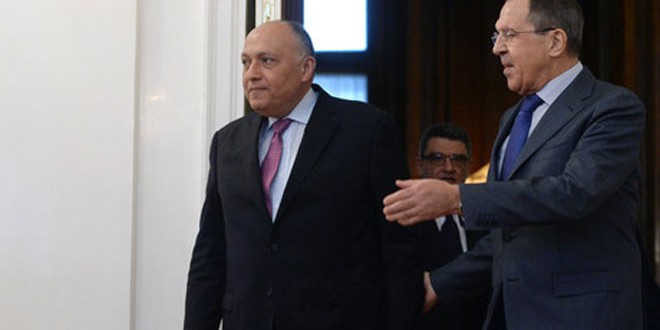 Lavrov said, in a joint press conference with his Egyptian counterpart following the meeting, that the Syrian People are the ones who decide the future of their country, and this is stated in the UN Security Council resolutions.

He noted that the success of the cessation of hostilities agreement in Syria has been relative so far, but it will become more successful as the Syrian-Syrian dialogue in Geneva goes on.

The Russian Foreign Minister added that there is progress being made over all tracks of the political settlement of the crisis in Syria, pointing out that the Turkish regime has to abide by the UN Security Council resolutions which call for preventing the infiltration of terrorists and weapons into Syria and purchasing stolen oil from them.

For his part, Shokri said that the international community should exert serious efforts to prevent the flow of terrorism across borders through monitoring borders and preventing the flow of the foreign fighters, as well as stopping the technical and financial support offered to terrorists because this support enhances the terrorists’ ability to destabilize countries in the region.

He pointed out that the crisis in Syria formed a big opportunity for terrorist organizations to infiltrate the Syrian borders.

On a relevant note, Kremlin spokesman Dmitry Peskov voiced satisfaction with the United States’ readiness to coordinate the promotion of a political resolution for the crisis in Syria.

Peskov said that “the most important thing now is the coordination of efforts in promoting the peaceful process of settling the crisis in Syria. In this case, the readiness to coordinate these efforts is satisfying. Both Moscow and Washington are concentrating most of their work on this.”