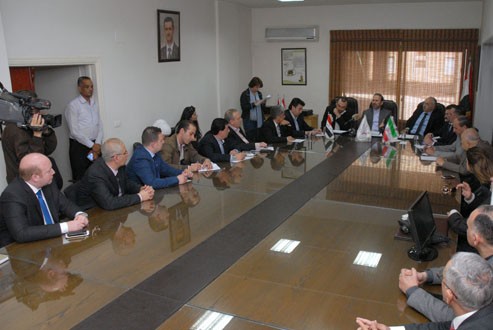 Damascus, SANA- Head of the Syrian Exporters Federation (SEF) Mohammad al-Sawah discussed during a meeting with the trade attaché at the Iranian Embassy in Damascus Ali Kazemeini means of enhancing trade relations between the two countries in different fields and activating the work of the private sector in imports and exports.

Al-Sawah explained that the aim of the meeting is to inform the Syrian exporters who are interested in the Iranian market that the date for implementing the conventions signed between the two countries begins after a month where the market will witness a flow of goods for the Syrian merchants and industrialists, noting that the Iranian market is big and one can take advantage of it.

Al-Sawah pointed out that the Federation is preparing to open warehouses and importation and exportation offices in Iran to help the Syrian and Iranian merchants and industrialists, adding that Syrian businessmen will participate in the Iranian expos as visitors and participants.

In turn, Kazemeini stressed the need to revive the commercial relations between the two countries, especially the economic ones, noting the need to restore the Syrian economy to its former glamour in parallel with the great victories achieved by the Syrian Arab army on the ground.

Kazemeini said that the agenda of expos to be held in Iran is now ready and will be sent to all Syrian merchants and industrialists who wish to display their products, adding that the Iranian Establishment for Expos will offer facilitations for all Syrian participants.