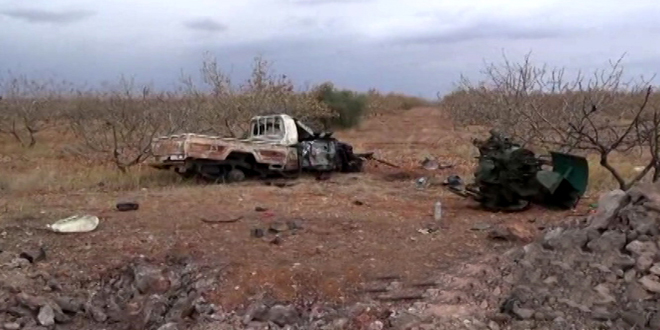 Hama/Deir Ezzor, SANA- A unit of the army and the armed forces on Saturday foiled a ISIS terrorist  attack in the countryside of Salamyieh City in the eastern countryside of Hama Province.

A military source told SANA that a unit of the army destroyed a car bomb loaded with huge amounts of explosives that belongs to ISIS terrorists before reaching one of the military points in the surroundings of al-Mffaker village in the countryside of Salamyieh City.

Later, a military source said army units thwarted attempts by ISIS to attack military positions in al-Salamiya countryside in Hama province along the direction of Barri Sharqi/Aqareb/al-Bassel forest/Tal Abyad, inflicting heavy losses in personnel and equipment upon the terrorists.

The source said the clashes resulted in the death of 35 terrorists, injured scores of them, and destroyed 4 machinegun-equipped vehicles, a bulldozer, artillery pieces, and mortar launchers.

Earlier today, Six civilians were killed and several others were injured in three terrorist explosions in Salamyieh area in the eastern countryside of Hama.

Earlier Friday, army units, in cooperation with the popular defense groups, restored security and stability to Rasm al-Teineh and Mentar al-Hajaneh villages in the eastern countryside of Hama, inflicting terrorists’ heavy losses in personnel and equipment.

In Deir Ezzor province, the Syrian Air Force eliminated a number of ISIS leaders in a series of concentrated airstrikes on their positions in the province’s countryside.

A military source told SANA that the airstrikes focused on ISIS hideouts, bases, and concentrations in al-Sfaira al-Foqani village 12 km northwest of Deir Ezzor city, which resulted in the death of a number of ISIS leaders and in destroying entire hideouts along with the weapons and ammo inside them.

The source added that airstrikes also destroyed ISIS hideouts and concentrations in al-Jafra village in the countryside east of Deir Ezzor city.