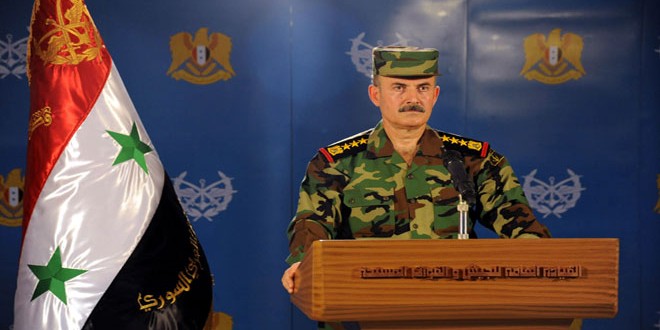 Damascus, SANA – The General Command of the Army and the Armed Forces said Army and Armed Forces units established full control over the thermal station in Aleppo’s eastern countryside on Saturday afternoon.

In a statement, the General Command this achievement was made following a series of concentrated and precise operations and with support provided by the Syrian Air Force and the Russian Aerospace Forces, adding that army units also restored security and stability to a number of towns in the province’s eastern countryside after destroying ISIS bases and concentrations in the area.

The General Command said the significance of this achievement lies in the fact that the thermal station is one of the most vital facilities in Syria as it provides Aleppo province and other provinces with electricity, and establishing control over it will restore life to Aleppo province.

The statement said this achievement follows a series of successes for the Armed Forces in Aleppo’s northern countryside and Lattakia’s countryside, proving once again that the Syrian Arab Army and popular defense groups are capable of defeating terrorism and eliminating it, in addition to proving the efficacy of the cooperation and coordination between Syria and its friends.

The General Command asserted that more achievements and victories are forthcoming, which will culminate in restoring security and stability to the entire country, concluding by reiterating its calls on all those who are carrying weapons to lay down their weapons, resolve their legal status, and return to their normal lives.