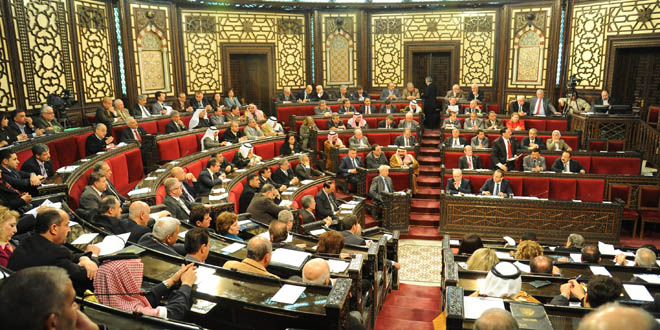 Damascus, SANA – The People’s Assembly discussed in its session on Monday the performance of the Health Ministry in light of the circumstances spawned by the current crisis and the steps taken to ensure the availability of drugs, prevent the spread of diseases, and develop the health sector and its services.

The Assembly members stressed the need to provide medicine for terminal diseases, increasing the number of health centers and clinics in some area, providing hospitals with equipment, and rehabilitating health facilities in areas secured by the army. The issues raised by the members included providing new ambulances for Homs province, establishing a blood bank in al-Bassel Cardiac Diseases and Surgery Center, monitoring pharmacies and the prices of medicine, providing vaccines for H1N1 in health centers, and addressing the law on full-time work for doctors.

Addressing some of the members’ queries and questions, Health Minister Nizar Yazigi said that the shortage in ambulances in some area is due to two factors: assigning ambulances to transport injured people in unsafe areas, and the damage caused to ambulances by terrorist attacks, adding that work is underway to procure more ambulances via the Iranian credit line.

Yazigi said the number of cases of H1N1 reached 180, with 70 cases ending in the death of the patients, noting that the cause of deterioration in severe cases is usually due to prior renal, pulmonary, or immunity failure, adding that the targeted groups for H1N1 vaccines are children under 5, elderly people, and people with terminal diseases.

He also asserted that the Ministry is monitoring locally-produced pharmaceuticals carefully, in addition to monitoring pharmacies.

The Minister said the protocols for treating cancer are being revised in cooperation with the Ministries of Higher Education, Defense, and Interior with the goal of procuring the medicine needed for treatment, adding that the Ministry will be procuring vaccines from Russia and some types of medicine for cancer and terminal diseases from Cuba as of April.