The army establishes control over 2 villages in Aleppo, kills more than 30 terrorists in Hama and Idleb 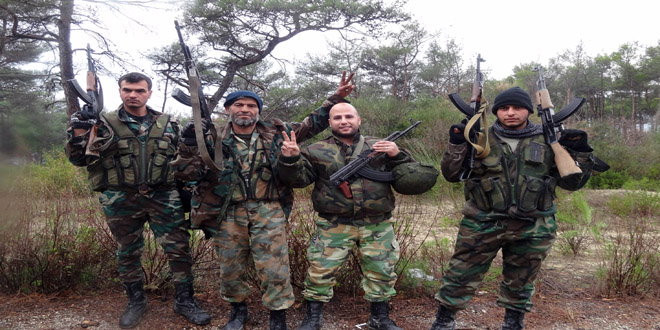 Provinces, SANA- The Army and Armed Forces continued fighting terrorism, killing scores of them, injuring others and destroying their vehicles in different areas of the country.

Army units, in cooperation with the popular defense groups, restored security and stability to Balouzeh village in the eastern countryside of Aleppo province, a military source announced on Thursday.

All positions of ISIS terrorists were eliminated in the village, which is located in al-Sfeireh area.

Later, the source told SANA that Ein al-Jamajmeh village in the northeastern countryside also came in the army’s hands. A number of explosive devices left behind by ISIS terrorists were dismantled.

In the meantime, army units targeted gatherings of ISIS terrorists and destroyed their machinegun-equipped vehicles during operations in Jeb al-Safa village and al-Bab city in the northeastern countryside of Aleppo.

Gatherings of terrorists were also targeted in Tal Mseibin village in the northern countryside of the province and others’ positions and fortifications in Haiyan town.

An army unit inflicted heavy losses upon terrorist organizations and destroyed their weapons and ammunition in the surroundings of the Scientific Research Center, west of Aleppo city.

Inside the city, an army unit destroyed positions for Jabhat al-Nusra and other terrorist organizations in Bani zaid neighborhood.

An army unit killed 19 terrorists from “Jabhat al- Nusra” and injured 53 others after targeting their gatherings in al-Tamane’a in the southern countryside of Idleb province, a military source told SANA Thursday.
The army also destroyed 3 heavy machinegun-equipped vehicles and a car loaded with mortar shells affiliated to Jabhat al-Nusra terrorist organization.

Terrorist Abdel Karim al-Shihab, the self-claimed leader of the so-called al-Furqan Battalion at ahrar al-Sham Islamic Movement was killed and terrorists Mohammad al-Ali, Karim al-Shaowa, Abdullah al-Shaowa were injured due to the explosion of an explosive device targeting their car near Saraqeb bridge in the southeastern countryside of the province, according to the field source.

In the northern countryside of the Hama central province, a field source said that army units destroyed the so-called “Jund al-Aqsa” terrorist organization position in Murek and onother for the so-called “Islamic Union of Ajnad al-sham” at the surroundings of al-Sayyad town.

Other army units killed 7 terrorists and injured 6 others after targeting their gatherings in the villages of Skeik and Atshan and destroyed a car and a rocket launcher pad in the village of Lahaya.

The army units also killed 4 terrorists and destroyed a heavy-machinegun-equipped vehicle in the village of Ma’arkabeh.

In the eastern countryside of the province, an army unit inflicted heavu losses upon the terrorists of the Islamic state in Iraq and Syria (ISIS) in personnel and equipment in the army operations against their positions and fortifications in the village of al-Sea’n, in the countryside of al-Salamiyeh.

Army units destroyed dens and two vehicles equipped with heavy machine guns for ISIS terrorists near al-Baiyarat and in Onq al-Hawa and Rahoum in the eastern countryside of Homs.

The army also destroyed vehicles and positions for ISIS and Jabhat al-Nusra in al-Tloul al-Soud in al-Qaryatin to the south-east of Homs and Um Sharshouh village to the north of Homs.

An army unit carried out precise operations against gatherings of terrorists in Daraa al-Mahatta and Daraa al-Balad in the city of Daraa.

Fortified sites and a vehicle were destroyed during the operations, which also left a number of terrorists dead or injured.

A position for terrorists was also destroyed in Atman town, 4 km to the north of Daraa city.

Another army unit destroyed hideouts and fortified sites for Jabhat al-Nusra terrorists in the surroundings of Busra al-Sham city, 40 km to the east of Daraa city.

Terrorist organizations acknowledged on their social media pages the death of many of their members, including the military leader of the so-called “Jaish al-Islam” who is identified as Mohammad Kheir Attalla al-Naasan and nicknamed as “Abu Hadid”.