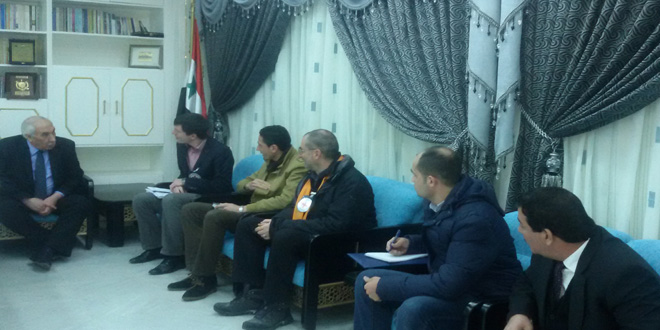 Hasaka/Daraa, SANA-Hasaka Governor Mohammad Za’al al-Ali discussed with Sasha Costar official of the activities of the International Committee of the Red Cross (ICRC) in the northeastern region and Yassin al-Bashir, the ICRC official for Water Affairs means to activate cooperation between the both sides to improve the services in Hasaka province, mainly in water and health sector.

The governor pointed out that the areas in the countryside of the province need new wells to provide water for citizens, particularly al-Yarobia, Tal Tamr, Tal Hamis, Tal Barak and al-Hol over which army restored control lately.

In turn, Costar said that work continues to rehabilitate Hasaka and Ras al-Ayn hospitals and will include the full rehabilitation of water and sanitation sectors.

In a relevant context, Daraa Governor Mohamed Khaled al-Hannous discussed with a delegation from the ICRC, headed by Johannes Roth, the Red Cross official in the southern areas the plans of Daraa Water Institution for the current year and the difficulties that faces this sector in addition to the strategic projects which offer alternative water sources for many areas in the province.

For his part, Roth said that cutting off water is wrong, adding that the rejects these acts.