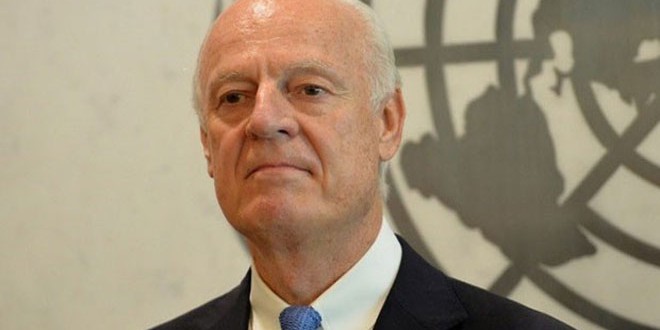 Geneva, SANA – UN Special Envoy on Syria Staffan de Mistura said on Monday that January 29th is the expected date for beginning Syrian-Syrian talks in Geneva, and that invitations to the talks are to be sent on Tuesday January 26th.

In a press conference held in Geneva, de Mistura said that there are still disagreements in viewpoints regarding the list of sides to be invited to talks, but there are ongoing discussions in several capitals with the participation of US State Secretary John Kerry, Russian Foreign Minister Sergey Lavrov, and other states’ foreign ministers.

He noted that he was being very careful about sending invitations because this affects the course of negotiations, adding that he didn’t want a repeat of the negative experience of Geneva 2 as Geneva 3 mustn’t suffer the same fate, and he wanted to be sure that if the talks begin, then they should begin in a serious manner.

The UN Envoy pointed out that there won’t be any official opening ceremony, because the goal will be tangible talks that may last for 6 months on the basis of a pragmatic methodology.

He said that the priorities of the talks will focus on a sustainable ceasefire, combating ISIS, and delivering humanitarian aid, adding that he will work towards bringing a wide spectrum of the opposition as per the UN Security Council resolution which authorized him to form a list of invitees, asserting that talks will be held on schedule despite continuing disagreements on the list of participants.

De Mistura said the tempo of negotiations might quicken or slow down as many changes are likely to occur. “But what is important,” he added, “is to keep the momentum alive. If negotiations turn out well during the first few weeks, there will be enough time to prepare for the coming round.”

He hoped negotiations will be direct in the near future, pointing to an agreement by all sides that the Syrian crisis cannot be solved militarily.

De Mistura said the Syria-Syrian talks are focused on the future government, constitution and elections, in addition to humanitarian aid and a ceasefire mechanism.