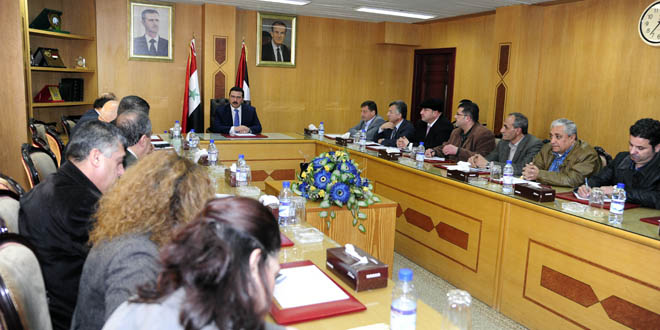 During a meeting with a delegation from Russian company Sovocrim headed by Mohamed Magometovich Temirov, Shahin said that the Syrian government is working on improving economic relations between Syria and Russia to match the level of political and military relations between the two countries.

The Minister underlined the importance of carrying out the rehabilitation of Talkalakh Grain Mill by Sovocrim on schedule and according to the contract signed between the two sides.

In turn, Temirov said that Russian President Vladimir Putin had directed Russian companies to accomplish their projects in Syria and to develop cooperation relations with the Syrian side.

He noted that Sovocrim is working on implementing the agreement related to Tal Kalakh Mill without delay, adding that the company will rehabilitate Adra Granary as well, and that it’s keen to expand its cooperation with Syrian companies.