New villages and mountains in Lattakia under the army’s control, a Jabhat al-Nusra leader killed in Idleb 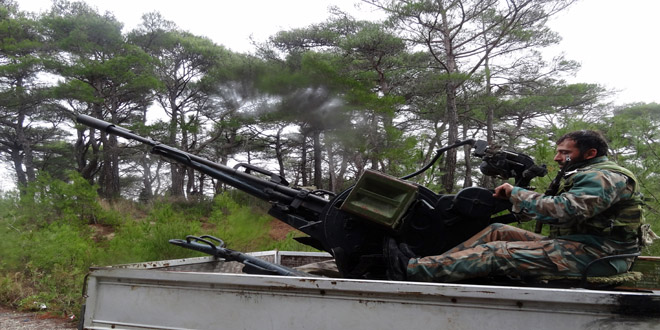 Provinces, SANA – More areas across the country are coming under the control of the army, aided by the popular defense groups, with many terrorists getting killed and others fleeing clashes, while their weapons and equipment are getting destroyed.

An army unit and the popular defense groups made a new advance on the northern countryside of Lattakia, establishing full control over al-Kindeisiyeh and al-Sukkariyeh villages and the surrounding hills, a military source announced on Sunday.

The army also took control of the mountains of al-Khanadiq, al-Kindeisiyeh, Kazbar and al-Sindyan in the same region, the source told SANA.

Engineering units later combed the areas and dismantled explosive devices and mines that had been earlier planted by terrorists, said the source, adding that most of the terrorists in those areas were killed, while the rest fled away towards nearby areas and woods adjacent to Rabiaa town near the Turkish border.

Army units in cooperation with popular defense groups established control over Ra’as al-Ghazal and Ra’s al-Kabeer hills in the northern countryside of Lattakia.

In Idleb province, the army’s operations during the past 24 hours were concentrated on targeting hideouts of “Jaish al-Fateh” terrorist organization in Kafr Sijneh village and al-Arbaeen Mountain in the southern countryside.

Many terrorists, including foreigners, were reported killed in al-Arbaeen Mountain. Among those were the terrorists Abu Samara from Turkestan, Abu Ayoub al-Ansari from Turkey, Abu al-Walid from Chechnya, Abu Muslem from Tunisia, Abu al-Ward from iraq and the Saudis Wael al-Hamad and Ghaleb al-Husseini.

At least 23 terrorists were killed in intensive army artillery firing on Jabhat al-Nusra centers in Kafr Sijneh village, located 15 km to the southwest of Maarret al-Nouman city. Among those killed were a leader within Jabhat al-Nusra named Abdul Qader al-Sbeih, in addition to the terrorists Mohammad al-Danawer and Abdul-Karim al-Saraqebi.

The army’s raids ended up with eliminating vehicles equipped with heavy machine guns and various weapons in addition to killing a number of the terrorists.

The Syrian Air Force carried out concentrated airstrikes on terrorists’ bases and supply lines in the towns and villages of Kafr Naboudeh, Kafr Zeta, and Talaf, which resulted in destroying several bases along with the weapons and munitions inside them.

The army destroyed dens and positions for ISIS terrorists in al-Hayal mountain and al-Maqale’e region on the direction of al-Bayarat-Palmyra to the west of Tadmur.

A military source told SANA that the army also destroyed vehicles for the said terrorist organization in a special operation against its dens in al-Toloul al-Sud in the Qaryateen to the east of Homs.

Meanwhile, terrorist organizations acknowledged on their websites the killing of 13 terrorists.

In the southern province of Daraa, army units destroyed two vehicles for terrorist organizations as they targeted their gatherings south of al-Abbasiya and on the road between al-Sad and the meteorology department in Daraa al-Balad neighborhood in Daraa city.

Also in Daraa al-Balad, an army unit destroyed a pickup truck used by terrorists on the road between al-Abbasiya and the meteorology department in al-Nazihin Camp.

East of Daraa city, an army unit killed and injured many terrorists in strikes targeting their hideouts and concentrations east of al-Naima town.

Terrorist organizations acknowledged on their pages on social media sites the death of many of their members, including Mostafa Suleiman al-Otman, Mohamed Ahmad al-Mhawish al-Hariri, Omar Mohamed Adib Sawan and Mohamed Toma Qassim.