New areas in Aleppo and Hama under the army’s control, more terrorists killed in other areas 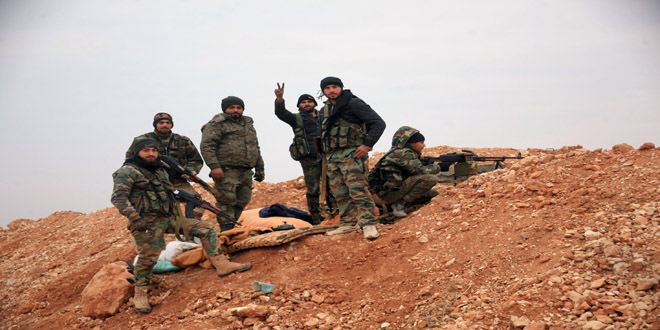 Provinces, SANA- The army is making advances in the countryside of both provinces of Aleppo and Hama, while its units, backed by the Air Force, continue targeting terrorists’ positions in other provinces, destroying more sites and equipment and killing many terrorists.

Army units established control over al-Sreib village and the surrounding farms in the eastern countryside of Aleppo province, sources on the ground told SANA on Thursday.

Fierce clashes with ISIS terrorists preceded this new advance, said the sources, noting that the clashes resulted in the death of most of the terrorists, while the rest fled to neighboring villages.

Subsequently, the army units reopened the road linking between Eishe village and the villages of Ein al-Bayda, al-Sreib and Nasrallah reaching to Aleppo-Raqqa highway after dismantling the mines and explosive devices planted earlier by ISIS members, according to the sources.

Gatherings of Jabhat al-Nusra-linked terrorists were targeted in Old Aleppo, with a number of them getting killed or wounded.

In the western countryside of the province, army units killed many terrorists, injured others and destroyed their arms during operations against their dens in al-Abawiyeh village, south of Khirbet Hazmar and al-Mansoura.

Army operations also targeted terrorists in Tal Rifaat, 35 km to the north of Aleppo city, and west of al-Nairab airport in the southeastern countryside of Aleppo.

In the same context, army units established control over Deir al-Fardis town in the southern countryside of Hama province.

Army units in cooperation with popular defense groups established full control over the town which is located 21 kilometers to the south of Hama after eliminating the last terrorist dens in the area.

Locals in the town organized a march supporting the Syrian Arab Army who saved them from terrorism and eliminated terrorists.

Earlier, field sources said that at least seven terrorists were killed during continued operations against positions of Takfiri terrorist organizations affiliated to the so-called Jaish al-Fateh in the northern countryside of Hama.

Army units carried out a special operation against a position for the so-called al-Izza gathering in al-Lattamneh town 35 kilometers to the north of Hama.
At least five terrorists were confirmed dead and the position was completely destroyed.

Another unit of army killed two terrorists and injured 12 others from the so-called Jaish al-Fateh during a special operation against one of their positions in the surroundings of Kafar Zeta town.

A car for the Islamic Union for Ajnad al-Cham was destroyed and a number of terrorists were killed during an army strike in Kafar Zeta town.

Earlier, an army unit carried out special operation on the position of the so called “Tajamu’a al-Ezza” terrorist group in al-Latamneh town, 35 to the north of Hama city, in the northern countryside of Hama province.

At least five terrorists were killed, including the terrorist “Mohammad al-Ali”, and their position was destroyed completely in the army’s operation.

Elsewhere, an army unit killed two terrorists and injured 12 others from the so called “Jaish al- Islam” terrorist group in a special operation carried out at dawn on their positions in the surrounding of Kefr Zaita.

Additionally, A vehicle was destroyed for the so called “Ajnad al-Cham” terrorist group and a number of terrorists were killed in army operation in Kefr Zaita town.

Number of terrorists were killed, others were injured and one of their vehicles was destroyed during army’s continued operations in al-Sheikh Maskin area in the northern countryside of Daraa, according to sources on the ground.

The sources said that an army unit, aided by the allied forces, directed concentrated strikes against sites and supply-routes of the so called “al-Muthna Islamic Movement” and Jabhat al-Nusra in the area surrounding al-Sheikh Maskin area.