Moscow, SANA-The General Staff of the Russian Army affirmed that around 2,000 oil tankers belonging to ISIS were destroyed in Syria since start of Russian military operation in implementation of the agreement between Syria and the Russian Federation to combat ISIS and confront international terrorism.

Chief of the Russian General Staff Main Operations Department Sergei Rudskoi pointed out in a press conference held on Friday that Russian warplanes in Syria carried out 5240 sorties since September 30, noting that Syrian sources provide the Russian Defense Ministry with extra information about the terrorists’ sites.
Rudskoi said that the Russian Air force focused its airstrikes at facilities of extracting, storing, transporting and processing oil in Syria that are controlled by ISIS, adding that till now 2000 oil tankers were destroyed.

The Russian military official displayed during the press conference a videotape which proves that the trucks were smuggling stolen oil across the Syrian-Turkish border in coordination with Turkish government without any obstacles, noting that Russian warplanes destroyed during the last week 37 oil extraction and processing facilities used by terrorists in addition to targeting 17 oil convoys.

He added that terrorists are changing crude oil smuggling routes and using new paths to avoid Russian air strikes in Syria but Turkey remains their final destination.
The route is running from the areas which are controlled by ISIS in the countryside of Deir Ezzor through the road of Tell-Sfuk Post Control to al-Mosul and Zakho in Iraq, he added.

He noted that photos taken by Russian satellites during the past weeks show a sharp decline in the number of tankers transporting oil from Syria to the Turkish areas.
“One must understand that the profits from the smuggling of any products are used to finance ISIS, and any country participating in this illegal business is involved in international terrorism,” he added. 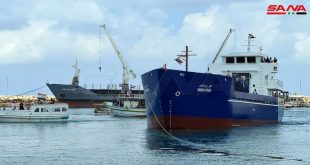